Benshi invites you to cast your eye over a company that now ranks among the leading European animation producers.

In 2003 Michael Rose and Martin Pope created Magic Light Pictures in London. It has since proved itself to be a treasure trove of animated delights, some of which have become classic children's films. These include: The Gruffalo, The Gruffalo's Child and Stickman !

Michael Rose previously worked at Aardman Animations at the head of the features department. The films he produced included Chicken Run and Wallace & Gromit: the Curse of the Were-Rabbit by Nick Park. Martin Pope, meanwhile, worked in television production.

That is Magic Light's motto. Their films, which are aimed at young audiences, are adaptations of children's books. They are screened every year on Christmas Day on BBC One, attracting more than 10 million viewers. Most of their short films are adapted from books by Julia Donaldson and Axel Scheffler: The Gruffalo, The Gruffalo's Child, Stickman, Room on the Broom and The Highway Rat.

Julia Donaldson has published nearly 200 children's books. She has won numerous awards and been appointed by the Queen to the Order of the British Empire for services to literature. She served as National Ambassador for young People's Literature from 2011 to 2013. She is also a playwright, novelist and songwriter for children's television programmes.

Axel Scheffler is a German illustrator who has been based since the 1980s in England, where he studied at the Bath Academy of Art. He has illustrated more than 150 books that have been translated into more than 40 languages. The pair's illustrated books have become classics of children's literature, and not just in Great Britain!

It all began with the "Gruffalo phenomenon". The Gruffalo was first published in England in 1999. In 2004 the sequel to his adventures was published: The Gruffalo's Child Since then the two books have been translated into 41 languages and sold more than 10 millions copies worldwide.

When adapting these bestselling children's books, Magic Light aimed to stay as faithful as possible to the illustrations in an effort to translate the magic of the drawings on to the big screen. Sometimes the adaptations even surpassed the original work by taking viewers deeper. But while granting themselves a few liberties, the adaptations take great care to respect the universe created in the books, albeit while striving to amplify it and add more substance. The text, rhythm and musicality are all emulated wonderfully and with great precision.

The style is very recognisable

"We operate on the principle that the films have to be made in a single place to get the quality we want. And we go to where the talent is and where we can work with the budget we have. " Michael Rose, producer

Magic Light Pictures hatches the idea for the short films and handles the production but the films are not made on their premises, because they do not have a film studio. The animation of the films The Gruffalo, The Gruffalo's Child and Room on the Broom was entrusted to Studio Soi in Germany, which was founded in 2003. They use a combination of stop-motion animation and CGI (Computer-generated imagery)

"Since we wanted to give the impression that characters were done by hand rather than on a computer, then done frame by frame in sets, we worked with a sculptor (as for puppet films) that started by creating characters as figurines. That served to demonstrate the limitations of stop-motion characters to people who work with 3D modelling. Since the figurines are small, you cannot go into too much detail...," Jeroen Jaspaert, film director. "We spent a lot of time developing characters for this film. We even made plasticine models for 40 characters in the film and then scanned them using photogrammetry. All of the figurines' imperfections were modelled straight on to the computer. We very quickly got a very tactile and realistic result that immediately inspired the team. This process showed how beautiful the film could be and enabled us to make an early assessment of the film's appearance and style. " Jeroen Jaspaert, director of The Highway Rat. 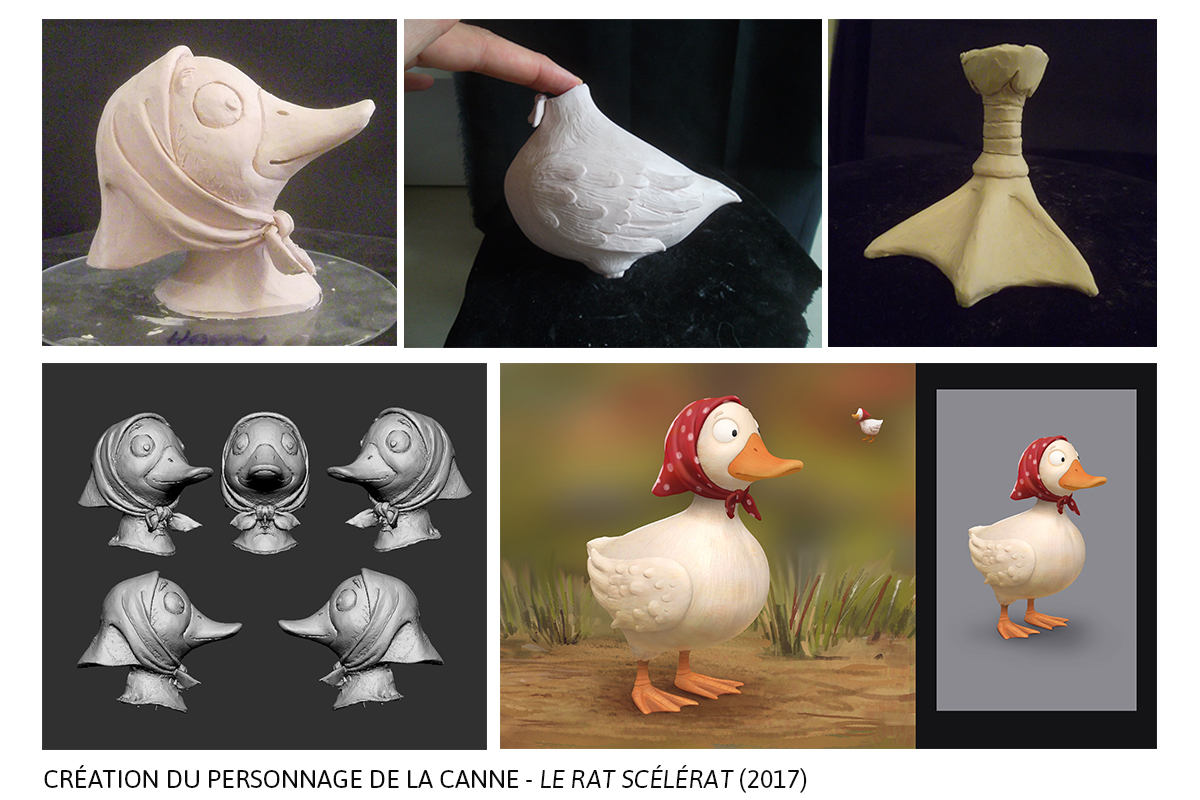 The animation of Stickman was done by Triggerfish Animation, which was founded in 1993 in Cape Town, South Africa, and specialises in cinema and entertainment. The story has a lot of different sets (with water, snow, ice, etc.) and was made entirely with computer-generated imagery.

For their following productions - Revolting Rhymes and The Highway Rat -, Magic Light Pictures chose to work again with the South African studios.

> The Gruffalo by Jakob Schuh and Max Lang - 2009
A little mouse goes for a walk in a very dark wood. The mouse meets a fox, an owl and a snake, all of whom find her very appetising and invite her to their home for dinner. But the little mouse is very clever and claims to be off to meet ... a Gruffalo! But what is a Gruffalo? 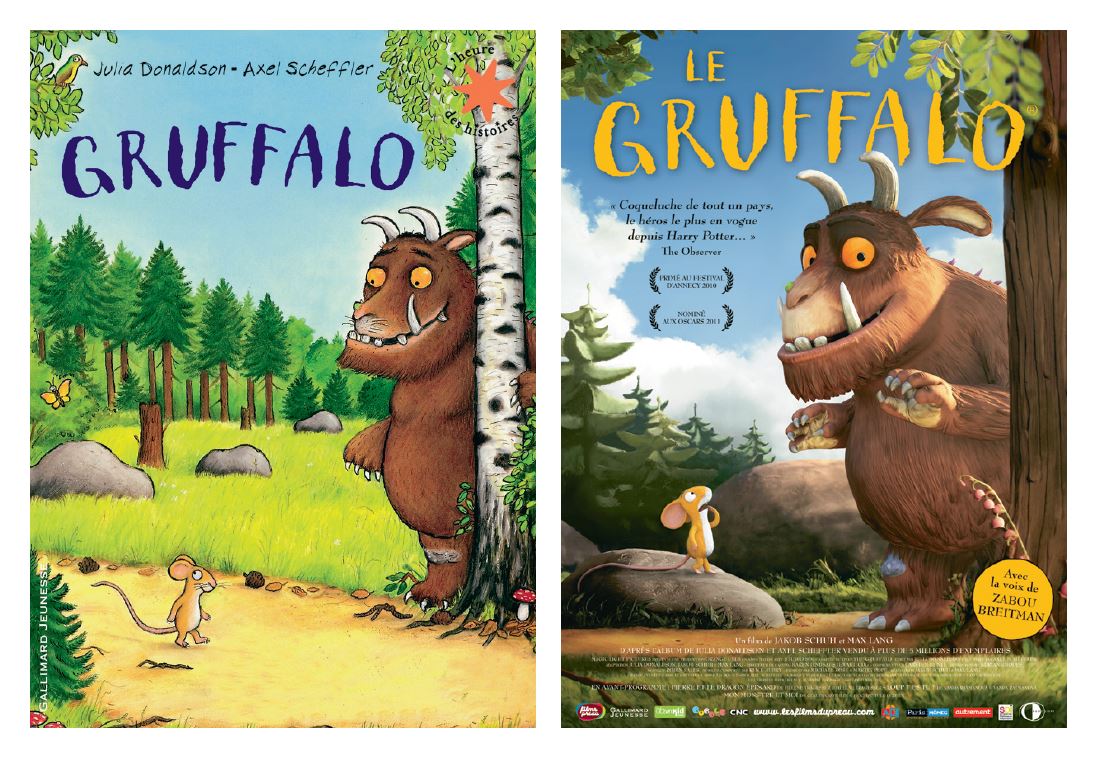 > The Gruffalo's Child by Johannes Weiland and Uwe Heidschötter - 2011
A little Gruffalo lives in a cave with his dad. Outside winter has laid its white blanket across the land and the wind is blowing hard. But the Gruffalo's child is too inquisitive to stay indoors, so he disobeys his father and ventures out on the trail of the Big Bad Mouse! 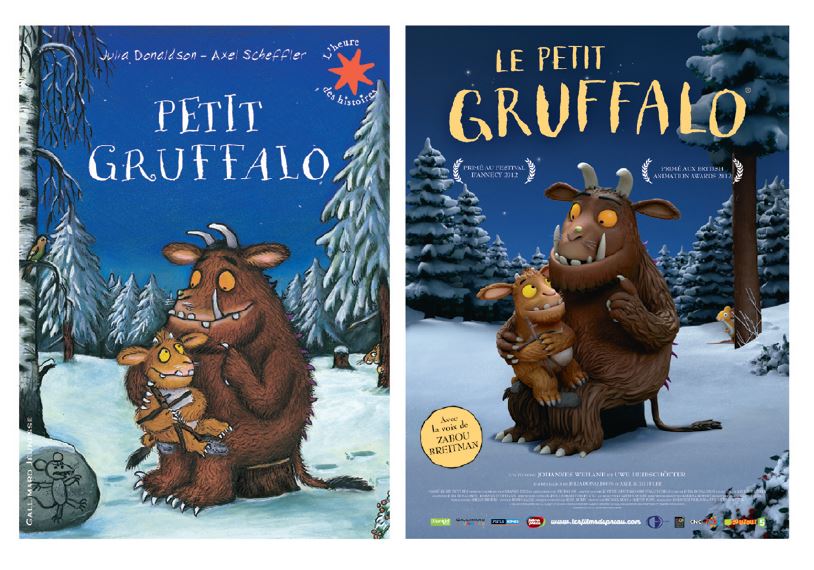 > Room on the Broom by Max Lang and Jan Lachauer - 2012
A friendly witch packs up her cat and cauldron and takes to the air on her broom. With the wind blowing hard, her accessories fall off the broom one by one and are found, successively, by a dog, a frog and a bird, all of whom end up tagging along on the journey. But the witch is being pursued by a hungry dragon ... The illustrated book sold 2.5 million copies worldwide! In France the book was published by Autrement in 2004 under the title Et hop ! dans les nuages.

> Stickman by Jeroen Jaspaert, Daniel Snaddon - 2015
Stickman lives a peaceful life in his family tree with Mrs Stick and their three little sticks. One day while out for his morning jog, he is caught by a dog who mistakes him for a run-of-the-mill piece of wood. That is the start of a series of adventures for Mr Stick who winds up very far from home… 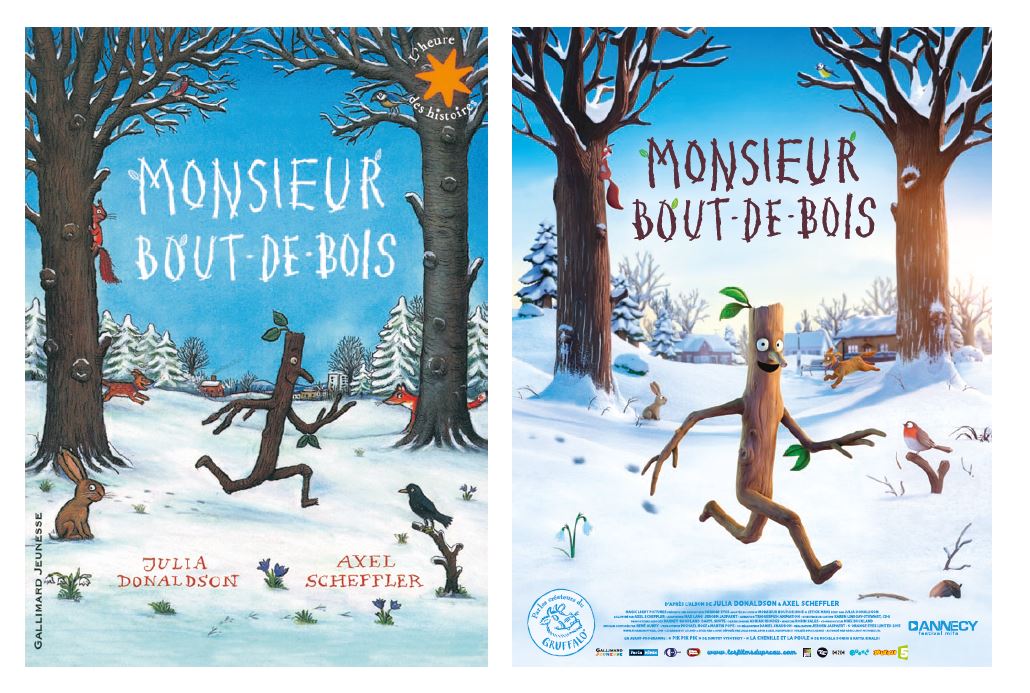 > Revolting rhymes by Jakob Schuh and Jan Lachauer - 2016
This programme, which consists of two short films made by Magic Light Pictures, is not based on an illustrated book by Julia Donaldson and Axel Scheffler, rather it is adapted from the 1982 book of the same name by Roald Dahl. But the desire to stay faithful to the original work, which was illustrated by Quentin Blake, is as keen as it was for the adaptations of the books by Julia Donaldson and Axel Scheffler.

> The Highway Rat by Jeroen Jaspaert - 2017
A rat sows terror by stealing food from those who can defend themselves the least. But one day he meets a duck who proves to be much cleverer than him... 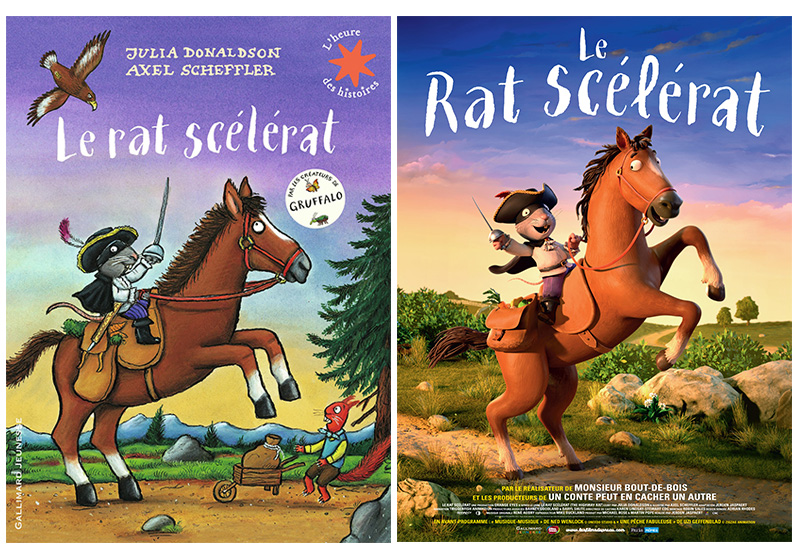 * By watching all the films adapted from books by Julia Donaldson and Axel Scheffler and produced by Magic Light Pictures, you will unlock the "MAGIC LIGHT" Collection pin, which will then be displayed on your child's profile!