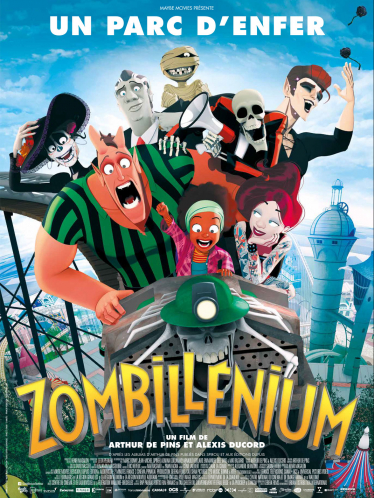 Hector is a health and safety inspector and his job takes him to Zombillenium theme park. He soon discovers that the zombies, vampires, werewolves, mummies, skeletons and other monsters are not just humans in costumes and makeup. They are genuine monsters whose souls belong to the devil and they are condemned to work in the theme park for all eternity! Just as Hector is about to ask for the park to be closed, he is bitten by Francis, the manager-vampire. And in keeping with the legend: when a human is bitten by a vampire, he too turns into a monster.

A horror film for children? Little kids dreamed of it, Arthur de Pins and Alexis Ducord did it! What a great idea it was to thrill children by casting vampires, zombies and skeletons, whose jobs are to frighten visitors to the theme park! The story is set in a grey and gloomy landscape in northern France. The park appears gently in the middle of a field as the mist lifts ... The cold atmosphere at the start of the film quickly gives way to comedic quips and funky, surprising and original characters that almost make you want to join "Team Zombillenium". The characters are skilfully crafted, each with their own idiosyncrasies, and they enable children to follow real heroes who carry admirable qualities: they show there is strength in unity and that factionalism solves nothing. The film has several layers of understanding, so can enjoyed by adults as much as children. While kids will relish a family comedy, grown ups will detect the references to class struggle and the decrying of social inequalities. The vampires are lovely and charming and spared from too onerous jobs, while the ugly zombies are assigned to all the most thankless tasks. Francis, the park's manager, reigns amid this peculiar population. He treats all of his monstrous workers fairly, and they do likewise with him. The graphic universe created by Arthur de Pins in the comic book album that the film is named after is perfectly respected here, in no way betrayed by the move to 3D animation. The round outlines are not intended to be realistic, unlike the sets and the fairly smooth faces, which are often depicted in full light or with back-lighting. For the music, Arthur de Pins and Alexis Ducord turned to Mat Bastard, the singer from the group Skip the Use. This gave the film a rock 'n' roll character. One character, Sirius, is clearly based on the singer. There is a rock 'n' roll, slightly crazy feel to the whole atmosphere of the film, with bad boy monsters and a manager who negotiates with the devil at the risk of becoming a sacrifice himself. Ultimately this family comedy gives far more laughs than chills. Viewers of all ages over 7 will enjoy the big-hearted monsters who are condemned to entertain humans for ever ... and are delighted to do so!

The film is suitable for children aged 7 and over, as despite the presence of monsters, there are no really shocking or scary scenes. But there are moments when the viewer jumps ... with glee!

Rand Peltzer is a terrible inventor who struggles to provide for his family. To celebrate Christmas properly,...

Living with neighbours is not always easy, especially when they are fantastic creatures! But with a little magic and a healthy dose of fantasy, anything is possible. Monsters, mermaids, talking cats, ghosts and crazy toons: this course introduces you to exceptional neighbours brought to life by the magic of the imagination and animated cinema. These meetings spawn the kinds of stories we love - the ones that help you grow.