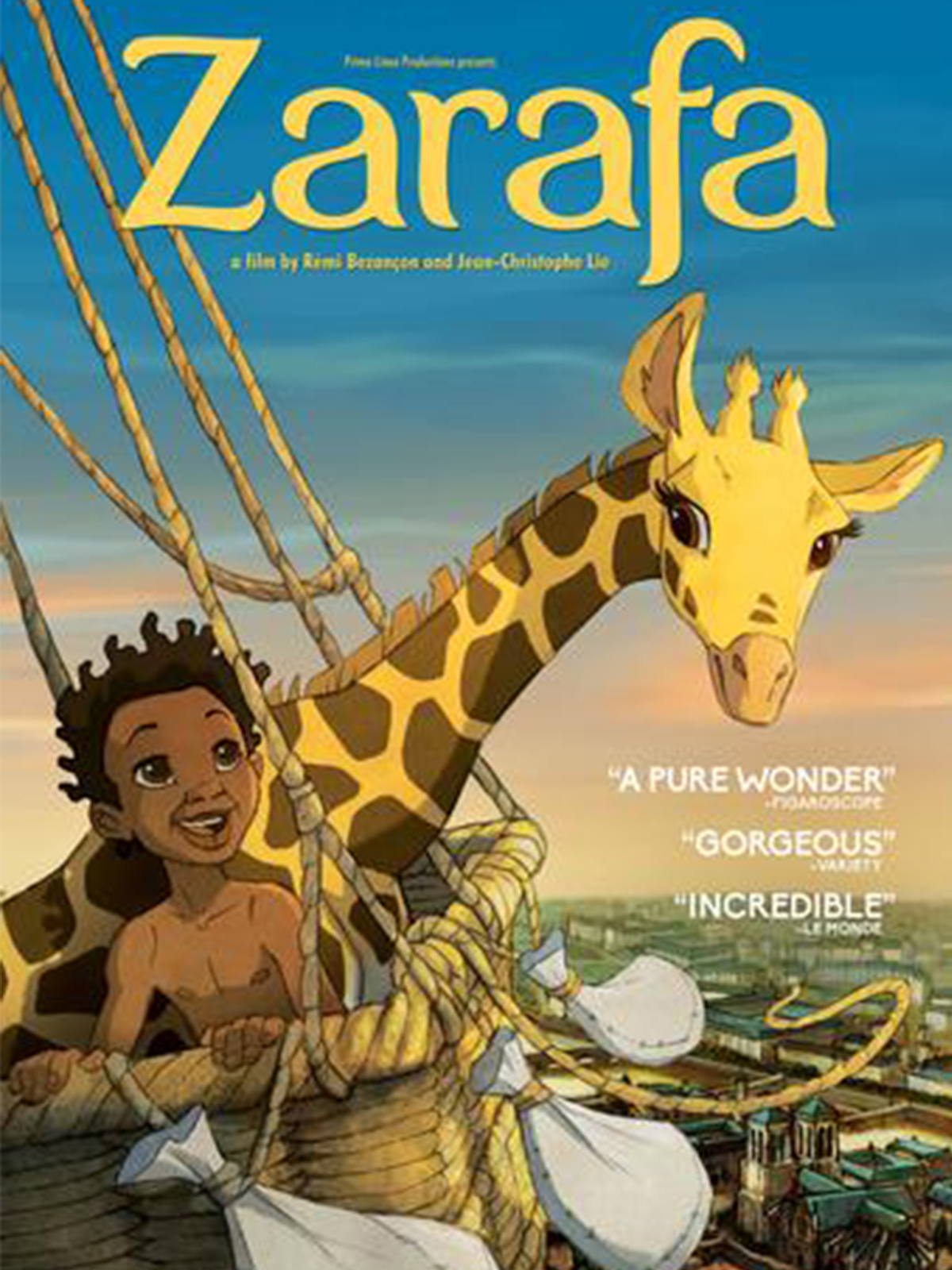 Review by Pauline Berra
Friendship and romance Adventure all the way

In Sudan, under an ancestral tree, an old man tells the story of a group of young children. It is the story of Maki, a little boy whose village was destroyed by slave traders and who went on to befriend a young giraffe named Zarafa. But Zarafa has an entirely different destiny: she is captured by Hassan, a Bedouin working for the Pasha of Egypt who wants to give the giraffe as a gift to the king of France, Charles X, in return for his help against the Turks besieging Alexandria. But Maki has other ideas. He secretly follows Hassan, waiting for an opportunity to rescue Zarafa and flee together. Thus begins a long and dangerous journey that will take them to Paris.

Through the adventures of Maki and Zarafa we are, in fact, told the story of the first giraffe in France. The directors based their script largely on historical fact, around which they wove a story of their own, which is both fabulous and cruel. The film is set in the 1820s, in the middle of the slave trading and colonisation era. So the story is split in two: on one hand, it is an almost naive fable about a child who makes friends with a giraffe; on the other, it is an examination of the colonialism and racism of western society in the 19th century, especially in France. The film gives a rather caustic portrayal of French society at that time and tries to provoke discussion about a rapidly expanding industrial society that pays little attention to human feelings. However, the film finds a certain balance between satire and a tale and does not forget to amaze us with plenty of twists and emotions as well as very colourful characters and sublime drawings. Furthermore, the film benefits from its quite refreshing traditional animation in a current production context that mainly uses computer generated images. We can also discern a variety of inspirations taken from the works of the great names of animation. Here the artwork is inspired by cartoons from the golden age of Disney studios and a way of creating looks and feels in a film similar to those used by Miyazaki and Studio Ghibli. There are also elements based on Sylvain Chomet: in the figures of the king of France and his court full of embedded members of the bourgeoisie, we can detect traits from the characters of the Triplets of Belleville and the Illusionist. In addition, the balloon trip brings to mind Jules Verne and his journey around the world in 80 days. So the film takes a mixture of inspirations to give us a visually rich story and an abundance of themes. Through the historical context in which it is set, the film looks at political issues such as racism and also explores more "overarching" topics like life and death, the links between people and animals, beliefs, freedom and fraternity.

The film can be watched from the age of 6. However, be aware that particularly sensitive children may find some scenes quite difficult, and the historical context will require some explanations.