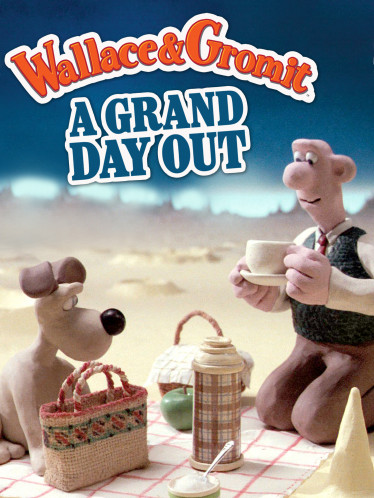 Wallace, an inventor with his head in the clouds, and his faithful companion, Gromit the dog, are looking for somewhere to spend their holidays. As they are getting ready to make their favourite dish - cheese -, Wallace realises that they have completely run out of it. So the pair start searching for a place where they could eat cheese and replenish their stocks. That is when a surprising thought occurs to them: isn't the moon made of cheese? Lo and behold, they have found their holiday destination...

Wallace and Gromit are stars of animated cinema. These two characters are very well known throughout their native United Kingdom but also around the rest of Europe, as well the United States and Japan. In England they have become veritable icons. They appear in a series of short films, a feature film and in advertisements, books and video games. A Grand Day Out is the very first of Wallace and Gromit's adventures. Each of the two characters has a distinct and striking personality. While Wallace is notable for his extravagant inventions and incorrigible clumsiness, Gromit is distinguished by eloquent silences, his perceptiveness and, above all, attitudes that make him more like a human than a canine. Nick Park says Wallace, as a creation, is a mixture of his father and one of his teachers, who was a bit eccentric. The creator and director demonstrates a keen eye for detail in his work, especially with the sets. A frame hung on a wall, the wallpaper patterns, a socket with a lamp plugged in, and so on: this array of details bestows a strong sense of "realism" on to the existence of these characters - their hobbies, their tastes and their work - and the way they live in their environment. The story starts with a whim from the characters, a fantasy that could come from a child: how about if we went to the moon for our holidays? From that point on, logic seems to take a back seat as the characters cobble together a rocket and can breathe on the moon without a space suit. Everything goes as if carefully planned, whereas we know very well that it is impossible. This dash of absurdity is fairly characteristic of the adventures of Wallace and Gromit and, more generally, of the unique English humour. Absurdity and eccentricity are the key components of what the English call nonsense and there is plenty of it here. From the moment the rocket takes off, viewers are carried into another world that seems impossible but in which we want to believe, especially as it is presented as a reflection of our own. For example, the little moon robot slaps a parking ticket on the rocket and dreams of going skiing. Moments such as that whisk us into a strange and poetic daydream.

Harmless for ages 4 and over, but the absurdity and eccentricity of the English humour will probably be lost on the youngest viewers.