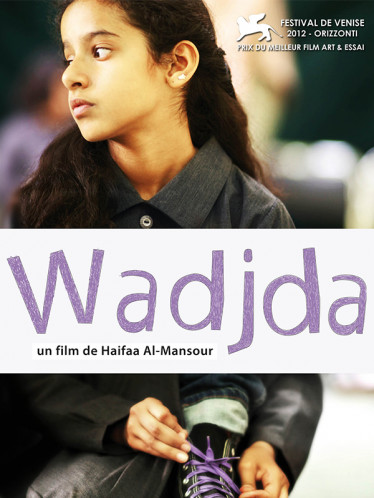 Review by Jeanne Frommer
Friendship and romance The meaning of life

Twelve-year-old Wadjda lives in a suburb of Riyadh, the capital of Saudi Arabia. Although she is reared in a conservative environment, she is full of life and wears jeans and sneakers, listens to rock and dreams of one thing: buying a lovely green bicycle.

Wadjda is enthralling. Not just the film but, above all, the girl. This 12-year-old, about to enter puberty and start becoming a woman, lives in Saudi Arabia, one of the most repressive countries in the world for women. In spite of that, Wadjda is driven by a single wish: to emancipate herself - from religion, social norms and the status of women. From the way she dresses to what she aspires to - to buy a bike -, she endeavours to break free of traditions. This leads to clashes with her mother, her friends and her teachers. Many of whom are also female. These adult women have become part of the social establishment as if it is normal, which is the clearest sign of the symbolic violence to which they are routinely submitted. Wadjda, the first film directed by a Saudi woman, is a bearer of hope. Because Wadjda succeeds in getting her bike by taking charge of her life, working hard and being accepted by her mother, who comes to understand that it is time to break the shackles and challenge the patriarchal system that oppresses them. By giving us this classic story and handling it in a way that makes it almost like a documentary, Haifaa Al-Mansour offers us an image of Saudi society as seen by a child. She films the city, daily life and the interactions between people with simplicity. Wadjda is part her and part Waad Mohammed (the young girl who performs the lead role). She is a character who represents all little girls who want to venture beyond their confines and take control of their own fates. She is not a pure figment of the imagination. All of this gives the film an authenticity that makes it all the more touching.

The film will be of interest to viewers aged 9 and over. Children can identify with the character of Wadjda and understand the issues at stake in the film and her situation.

Childhood throughout the World

Cinema bears eloquent witness to the world and to childhood, serving up the adventures, games, hardships and joys of children from all over the world. With this course Benshi invites you to take a world tour by watching seven portraits of children from various continents and cultures. From Japan to New Zealand, Colombia and Saudi Arabia, these young heroes in search of freedom tell us about their daily lives, their societies and traditions and how they perceive them. These seven films illustrate the universality of childhood and the richness and diversity of cinema. Have a good trip! An international and universal course for globetrotting young cinema lovers aged 7 and over. Films are in their original languages.