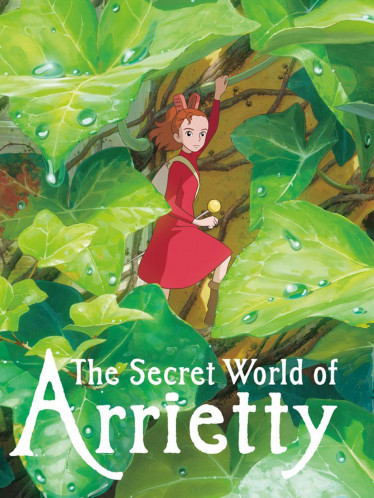 Review by Céline Maya Latour
Fantasy Adventure all the way

Tiny Arrietty lives with her parents under the floorboards of an old house. Her family are "Borrowers", minuscule beings who live secretly among humans. To avoid detection and ensure their safety, they have very precise rules that must not be broken: they have to steal what they need to survive in the house but always discreetly and in small quantities! But when young Shô - a sensitive boy awaiting an operation - arrives in the house, Arrietty starts flouting some of the safety rules. A beautiful story of friendship takes root between the two characters...

Although The Secret World of Arrietty is the fourth film by Studio Ghibli to have been directed neither by Hayao Miyazaki (who instead wrote the screenplay for this) nor Isao Takahata, we can see the distinctive Ghibli touch. There is a female hero, who may be small but has a big personality, in a lovely story that carries a moral - about preserving the environmental and helping the disadvantaged The fantastic world of these little Borrowers, which here is transplanted into a Japanese country home, is extremely well rendered. Switching between the human-sized world and the miniature sets gives the story a tone that is simultaneously realistic and enhanced by fantasy. Arrietty is a brave and reckless little girl who thinks nothing of breaking rules and whose curiosity leads her to form a beautiful friendship with young Shô, who suffers from an illness. Touching, poetic and aesthetically very well done, the first feature film by Hiromasa Yonebayashi, who went on to make When Marnie Was There, is highly promising!

Bandits and robbers are legendary characters in the history of cinema. But they are not always what we think: through these six films set in very different universes, you will meet lovable bandits, gentle and mischievous thieves and other, more sinister rogues. These figures are indispensable to adventure films and provide opportunities to address topics such as friendship, grief, family and unemployment. This course starts with a readily understood animated film and concludes with a neo-realistic Italian film and a film noir, charting a real progression in terms of cinematographic sophistication. So you are strongly advised to complete the course by watching the films in the suggested order.