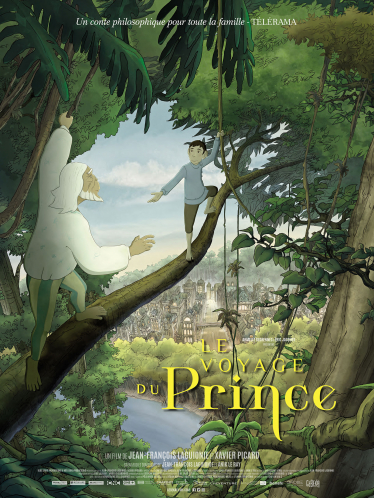 Review by Cédric Lépine
Fantasy The meaning of life

After being injured in a lost battle, an old prince washes up in an unknown land. He is taken in and looked after by young Tom and his parents. The Prince is delighted to discover this new civilisation and is quickly confronted by the intolerance of the Academy of Scientists.

The director Jean-François Laguionie again delves into the universe that he created in A Monkey's Tale (1999), this time to tell the story of a new main character, an elderly prince who arrives in a new world and is treated like a strange beast. All the characters are monkeys with the power of speech and could very easily have come from the Planet of the Apes, Pierre Boule's novel that has been adapted several times for the cinema. Here, on the other hand, there is no human presence even though the characters behave like human beings. The Prince is straight out of the Italian Renaissance and finds himself immersed in a society much like the one of the late 19th and early 20 centuries, with numerous scientific inventions. The Prince is like a migrant who arrives on the shore and frightens the so-called civilised society. This confrontation between two worlds is reflected through the Prince's adventures and the characters he meets throughout the film. Nature is a constant presence and is depicted with great detail. The directors have taken special care to represent the characters and sets as realistically as possible. The story examines man's relationship with nature in a way that demonstrates deep affection for the environment. It also explores people's tolerance of others with different cultures and languages.

A film that is suitable from age 7, with no violence or sad scenes. The attention paid to the dialogue and the history of man make this worthwhile viewing for anyone over 7-8 years old.

Back at the dawn of time, all monkeys lived together in the savannah, happy and free... Following a terrible...

Louise by the Shore

It's the final day of summer in the small seaside resort of Biligen-sur-Mer. The last holidaymakers are on...