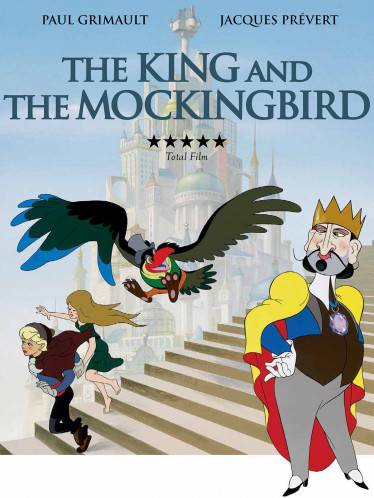 King Charles V + III = VIII + VIII = XVI rules over the kingdom of Takicardia. He runs it as a dictatorship where people must worship him. In this strange environment where statues of the king reign supreme, something magical happens: the characters in the castle's paintings come to life. That is how a shepherdess and a chimney sweep come to fall in love with each other and leave their paintings in a bid to elope. The king, who is also in love with the shepherdess, does his utmost to stop the pair from getting away. He sets off in pursuit of them. But a funny bird who lives on the roof of the castle and has a habit of mocking the king decides to get involved to help the two lovers...

The King and the Mockingbird is a timeless masterpiece that viewers never tire of watching. This was the first French animated film aimed at both children and adults, with a political dimension and innovative set arrangements. Themes of dictatorship, love and rebellion lie at the heart of the film. The themes are addressed in eminently surrealist ways, (Prévert was part of this movement and Grimault acknowledged its influence on his graphics) giving the film a very dreamlike tone in which poetry and humour are intertwined (the king's name being a nice example). The artwork is done entirely with gouache paint, plunging you into a universe awash with living characters from paintings, a king on a floating throne, mysterious creatures and a flying castle featuring incredible architecture (Miyazaki is its leading admirer and says it was the inspiration for his film Castle in the Sky). This colourful cocktail is enhanced by wonderful music by the Polish composer Wojciech Kilar, leaving us to abandon our imaginations to the pulsating adventure served up by this masterpiece of French cinema. A poetic fable that to be enjoyed by the whole family time after time.

["Cinema is the form of modern writing whose ink is light" - Jean Cocteau] Discover six films that plunge you into a fantasy world of pictures, including films that reference master painters and great works, or paintings from which you cannot escape and others you enter with glee, and films that are themselves animated paintings...