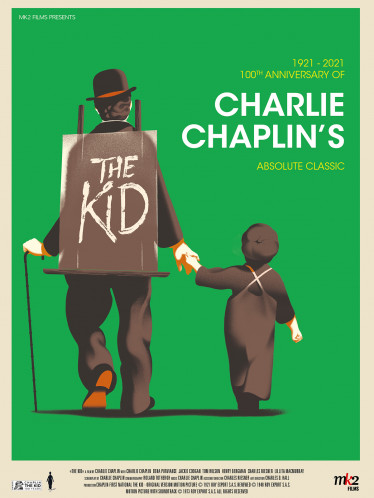 When she gets out of hospital, a penniless young mother who has been jilted by her lover abandons her baby in a car. The vehicle is stolen by a pair of gangsters who, upon discovering the baby, leave it in the street of a downtrodden neighbourhood. A tramp - Charlie Chaplin - finds the infant boy. After several fruitless attempts to offload him, he decides to bring him back to his tiny home. Five years go by. The baby has become a real little man. The tramp and he devise in a handy money-making scheme: the Kid smashes windows by throwing stones at them, and Chaplin repairs them. But social services are sniffing around and want to take the Kid off to an orphanage... Meanwhile, the boy's mother has become rich and goes looking for her son.

What a treat it is to watch this film again or, for young viewers who have not seen it before, to discover this truly touching masterpiece! As a portrait of a child in a distressed situation, the beauty of this film lies in its tenderness and compassion. Humour and imagination serve as shields to protect abandoned children: that is the lovely message of hope and courage given to us here by Charlie Chaplin. It is also a wonderful film about the loving relationship between an adult and an adopted young child. But let us start with the beginning of the film, which manages to pack in a huge number of indicators about the era in which the story is set. In 1919, being a single mother was a personal and social tragedy. Unmarried women who were left alone and pregnant were looked down on and ostracised. Morality and inflexible attitudes compound the distress of the young woman in this film. In the poor neighbourhood in which Chaplin lives, where are the fathers? It is striking how frequently women are left alone to raise their children in a context of grinding poverty. So The Kid is an excellent portrait of a time when social equality did not exist, children had to work and there was practically no formal protection for childhood. Charlie Chaplin cleverly succeeds in making us laugh by showing us how difficult it is to adopt a child, even one that practically falls out of the sky! Being a father is a lifelong commitment, so it is best to think hard before going down that road... Beyond the laughs we gain an insight into the difficulties of being a child who is abandoned in the street amid rubbish and gutters. When Chaplin decides to take him to look after him, he, as in all his other works, demonstrates delightful presence and inventiveness. A baby bottle, a chair, a toilet, a snack, a cabbage: so many intimate features of day-to-day life that he turns into moments of relief and humour. Similarly, a simple fight between youngsters arguing over a toy becomes an epic exhibition of bravery around which the whole community rallies. And then, we see a dream of paradise in which dogs have wings ... For that dream-like sequence alone, The Kid is a triumph.

This is a lovely and upsetting film of great sensitivity that can inspire both laughter and tears. The film can be enjoyed by everyone in the family over the age of 6 or 7.

Charlie Chaplin, a tramp in a city, helps a young florist. The woman is blind and thinks he is a rich man. He...