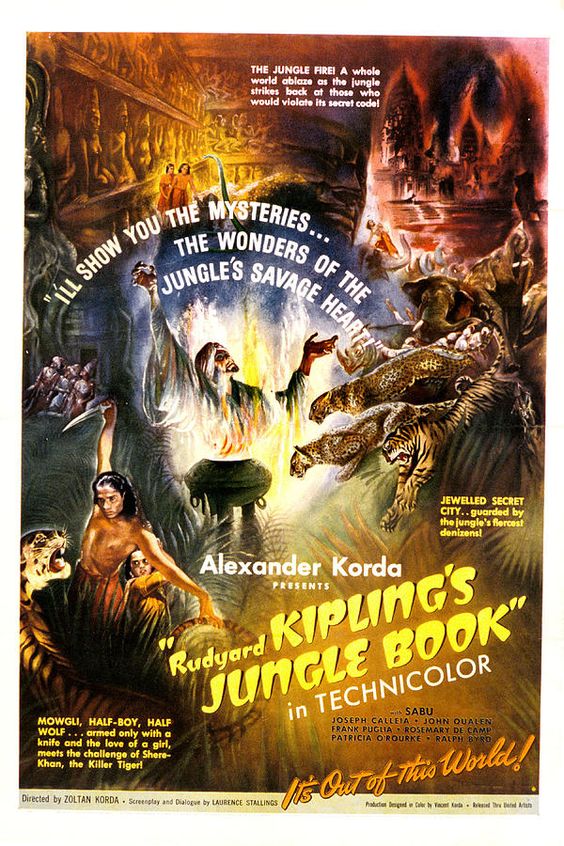 Review by Marie Horel
All-time classics Adventure all the way

In a jungle in British India, a memsahib woman - meaning a white woman of high social standing - is being escorted by an Indian officer when she meets Buldeo, an elderly storyteller who relates to them the tale of a wild young boy named Mowgli. That heralds the beginning of a flashback. In times gone by, Buldeo and the men of his tribe decided to build a village in the heart of a jungle populated by wild animals, most notably the formidable and feared Shere Khan, a ferocious tiger. The parents of a very young boy named Natoo are in the jungle when they lose track of their child. They go looking for him but Natoo's father is attacked and killed by the terrifying Shere Khan. The boy is taken in by a pack of wolves and reared as one of them. He forgets that he is a little man. When, ten years later, Natoo-Mowgli chances upon remnants of the village, he has to confront men whom the civilised world has made distrustful, greedy and cruel. As he discovers a language and morals that are unknown to him, Mowgli must face up to his own choices: go back to his wild life or never leave Messua, the woman who takes him in and may be his mother.

"You would have the book of the jungle to read in my eyes," says Buldeo at the start of the film. The first shots of Mowgli's story as told by Buldeo pay a superb tribute to the animal world. In a jungle abloom with exotic plants, your children will discover the fangs, claws and horns of the panthers, elephants, tigers and bears who live there. All of them are real live wild animals who were used in the making of the film. Shere Khan the tiger, Bagheera the panther, Baloo the bear and Kaa the snake are not merely creatures animated by Disney, but real animals with real hair and teeth and they will, I think, fascinate your children. The dialogue between the films of Zoltan Korda and Walt Disney is all the richer because the two adaptations of Rudyard Kipling's book are very different: nature and Mowgli's link with the wild world are not handled in the same way at all. Buldeo, the storyteller, acts as a double for the panther who tells the story in the Disney version. Zoltan Korda's little known film is a good entry point to the other rich films and topics highlighted in this section: the legend of the feral child, the twin themes of nature and culture that are looked at in a variety of books and films. There are ties with the character of Tarzan as well as mythological figures such as Moses and Romulus and Remus. The cavern full of gold coins that Korda introduces to the film emphasises the greed of people who are willing to kill each other to get rich. The use of such a typical place brings to mind the collection of Arabian tales, One Thousand and One Nights.

The film will delight young and old viewers alike. I recommend it, however, for children aged 8 upwards.

A long time ago, two children were nursed by the same woman. Azur, the blonde-haired, blue-eyed son of a...

Kirikou and the wild beasts

Why would a hyena go for a wander in a vegetable garden? What know-how can a village use to escape a potential...

Adama is a 12-year-old boy who lives in a remote village in West Africa. His people live according to the...