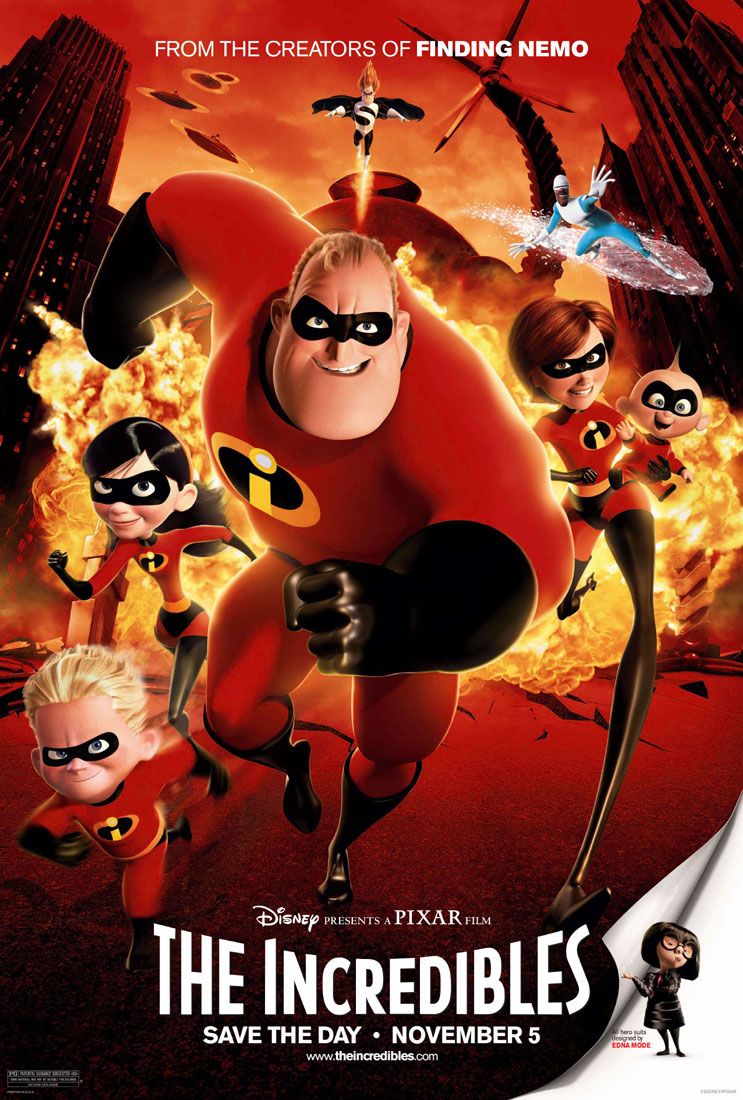 A few years ago, Robert Bob Parr, alias Mr Incredible, was forced into retirement by the upsurge in lawsuits taken against superheroes such as him. Since then, he has been living a quiet and orderly suburban existence with his wife Helen, who used to be Elastigirl, and their three children. He has a modest job as an employee with an insurance company, and he is terribly bored of his excessively calm life. So he jumps at the opportunity the arises when an unknown woman arranges a mysterious meeting with him on a distant island with the promise of new adventures! But it is a trap laid by his dastardly enemy, Syndrome, who boasts an array of powerful technological gadgets. So the whole family has to get together to rescue him…

With The Incredibles, Pixar tells the story of a family of superheroes whose members ensure justice prevails around the world by working as a team and in a spirit of solidarity. Each family member exists because of the others, which is to say their characters and powers all complement each other. At the start of the film, they seem like a typical family living in a suburban neighbourhood: Bob works in an office for an insurance company and Helen looks after the home and the three children. However, Bob finds it hard to adapt to "normal life". So, like Bruce Wayne in Batman, he leads a double life. A series of actions result in the couple resuming their superhero missions, and the children learn to use their powers. The characters evolve by asking questions such as: how should you live when you know you are different to everyone else? How can you make your difference a strength? That is where the film gains its weight. The supporting cast - Edna, Mirage and Frozone - are essential because they participate fully in highlighting the qualities of the Incredible family. Without them, nothing would be possible. Each character is based on Marvel comics: Dash is inspired by Flash, Violet brings to mind Jane Storm (The Invisible), and so on. Through the characters, Brad Bird thus pays tribute to comic book heroes. Bearing this mind, perhaps there is a little bit of him in Bob, a character who, at the start of the film, is nostalgic for his superhero past. He collects newspaper articles and items and photos from a bygone era. What is more, the plot, with its numerous twists and a final showdown, is inspired by action film such as James Bond. This is particularly noticeable with the use of music to reinforce the heros' exceptional actions. The retrofuturistic island sets evoke films of this genre (the town is oddly reminiscent of Alfred Hitchcock's North by Northwest). The use of computer-generated images adds to the sets by giving them a smooth texture with round and colourful forms. The film also owes some of its power to the character of Syndrome, who is the baddie in the story for several reasons. Firstly, he was not always wicked and could have avoided becoming so. During a flashback, viewers are shown that Syndrome admired Mr Incredible when he was a children, but, when they met, Mr Incredible shattered his dream of growing up to be like him. So he is driven by a lust for revenge. In addition, he is not exceptional, unlike "real" superheroes. And yet, thanks to his intelligence he creates a variety of technological marvels. Thus the film gets viewers to wonder about the relationship of people and machines (with an amazing duel scene), as do many action and science fiction films. You will have gathered, then, that The Incredibles is a film that has to be seen, both for its vibrancy and its humour and for its message that superheroes and baddies are closer than we think... A film to be watched so that you can adopt the heroes' philosophy: be yourself to be "Incredible" and understand that "everyone is exceptional".

The film is suitable for children aged 7 and over and will thrill the whole family.

Remy is a young rat who dreams of becoming a great French chef. Despite his family's opposition and the...

In New York, a mysterious, disfigured man injures Alex, a police inspector dispatched to catch him. While...