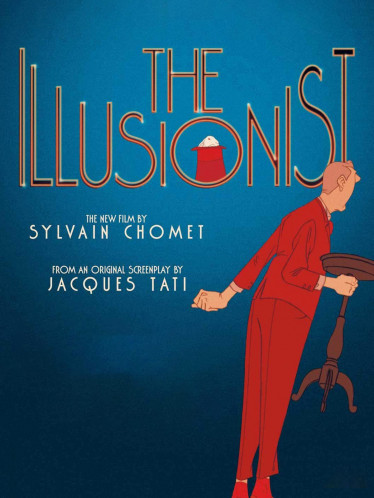 Review by Laetitia Scherier
Friendship and romance The meaning of life

Paris, 1959. The public is losing interest in music halls, with ventriloquism and acrobat routines considered to be old fashioned. Now people are going wild for the freshness and brashness of rock 'n' roll. Unable to compete in a world that is changing rapidly, an illusionist is forced to leave the big Parisian venues. To start a new life, he heads to London and then to Edinburgh, where he meets young Alice. Gentle, naive and amazed by his sleight-of-hand tricks, she becomes the family he never had. More than that, she gives him hope for the future...

The Illusionist is a work in its own right, with its own aesthetic and narrative ambitions, but it is inseparable from the life and oeuvre of Jacques Tati. Based on an original and unproduced script by this seminal cinema artiste, the film breathes new life into his spirit with a beautifully subtle mixture of humour and poetry. It is easy to see the tall and awkward figure of Tati in the frame of the illusionist, who is more a portrayal of the artiste than a depiction of his cinematic character. This is the second feature film by Sylvain Chomet - following The Triplets of Belleville in 2003 - and is, above all, the story of an encounter, the intersection of two paths. Viewers see the forging of a connection that is as beautiful as it is unlikely. It is also the story of a bygone era and the characters who symbolise it and to whom the director wants to pay tribute. With magicians, ventriloquists and clowns, he offers us a gallery of personalities who, having been plunged into doubt, attempt to adapt to the new demands of a changing society. He takes us from the streets of Paris to Edinburgh, conjuring a realistic and poetic world tinted with sweet nostalgia. Tender and pensive, The Illusionist is also about communication, which may seem paradoxical given the absence of dialogue. But since the illusionist speaks French and Alice speaks Gaelic, they have to invent their own language to understand each other. This particularity leads to some deliciously slapstick scenes. Music also plays a significant role in the film, deftly offsetting the lack of dialogue between the characters. Because he wanted to keep things as realistic as possible and produce a sophisticated graphic world, Sylvain Chomet chose to use artisanal animation. The drawings were done by hand and with great attention to detail, for the buildings as for the characters' movements. However, computer generated images were used for certain parts of the sets and accessories that have a lot of minute details, such as the illusionist's car and cart. This saved a huge amount of time. These bold decisions make The Illusionist an unusual work, and it plays masterfully with our emotions. When you finish watching the film, you wonder about the existence of magic in our society but are convinced of one thing: the magic of the cinema is more alive than ever!

We recommend this film for ages 10 and over. The Illusionist can be understood on several levels and will be enjoyed by children as much as adults. Adults will spot the more subtle references and allusions to the 1950s lifestyle.

The Triplets of Belleville

Madame Souza raises her grandson, Champion, alone and does everything she can to make him happy. She gives him...