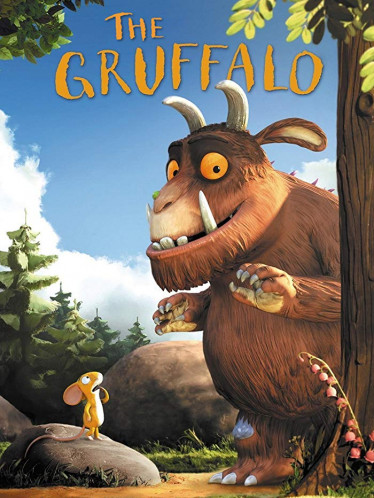 Review by Jeanne Frommer
The divine comedy Adventure all the way

You've heard of a dragon, a monster and a wolf ... but a Gruffalo? He has hooked toes, an awful wart at the tip of his nose, fierce claws and sharp teeth in a mighty jaw! Scary, right? And yet that's who the little mouse is off to meet! Fancy following?

The Gruffalo is an adaptation of the children's picture book of the same name by Julian Donaldson and Axel Scheffler. The film repeats the author's text, word for word, and thus retains the melody and rhymes of the original text and gives the  film its rhythm. The adaptation stays faithful to the book by adding as the narrator a mother squirrel who tells the story to her children, replacing the parent who reads the picture book to his or her kids. The animation, a mixture of computer generated images for the characters and models for the natural sets, is also based on the picture book. It transplants it into a space, offering hitherto unknown angles, such as the Gruffalo's back. The story is a fable and the moral could be: the law of the strongest is not always the best. Size has nothing to do with your strength or the fear you can inspire. The mouse manages to escape the predators, who are far bigger and more dangerous, by being smarter than them. The poetry and gentleness soften a film that could have been frightening. By using intelligence, the mouse succeeds in defusing the trickiest situations, bringing a welcome dose of humour. The well-casted British voiceovers enhance a thoroughly pleasant experience.

For age 4 and over. The amusing characters, the welcoming creative universe and the rhythm of the film will delight young and old viewers alike.

So what kind of adventures should we expect from a warm-hearted witch who has her head in the clouds and likes...

Monsters and witches come from folk tales and have been staples of the cinema since its inception. While these creatures provoke fear and anxiety in the collective imagination, they often turn out to less terrible than thought. This course invites you to meet these strange characters and find out what lies behind their monstrous appearance...