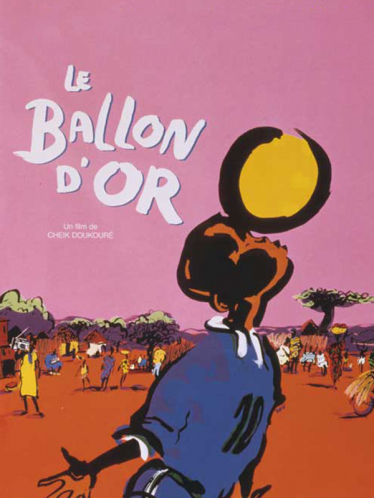 Review by Antoine De Ducla
The meaning of life

A 12-year-old Guinean boy, Bandian, leaves his rural village to follow his dream of becoming a top professional footballer.

Bandian is headstrong and passionate and wants nothing more than to be classed among the best players in the world. His ball is practically part of him; he cannot bear being separated from it. But the adults' world is a callous place, and he is confronted by the harshness and sometimes the downright nastiness of some villagers. After making a foolish mistake because of his ball, he has to flee the village for fear of reprisals. Thus begins a long journey in which he has to untangle himself from unhappy situations and the traps of unscrupulous people. Fortunately, he also meets precious friends such as Madame Aspirin, a French nurse, and the kind Bouba. Thanks to them Bandian's dream remains intact and draws closer to fulfilment with each tribulation that he overcomes. Told from Bandian's viewpoint, The Golden Ball shows us a tough reality marked by poverty and violence but the film is infused with a childlike innocence that transforms the story into a charming and tender fairytale. When seen through the eyes of Bandian, characters become extravagant and even the most difficult situations seem more benign. The director, Cheik Doukouré, uses his football-mad hero to give us a tribute to determination. The message is delivered with all the finesse of a perfect pass: you should always believe in yourself, never give up and keep going so that your dreams can one day come true. But you also need help from others to survive and make progress. One of the film's most endearing characters is Bouba, a dwarf who has apparently endured numerous humiliations from which he has learned great wisdom. Bouba serves both as a loyal friend and a protective big brother, always on hand to help Bandian out of trouble and encourage him when he starts to doubt himself. Like Bouba, The Golden Ball speaks in a way that children understand in order to celebrate solidarity and the urge to succeed.

We recommend this film for ages 8 and over. The film shows a reality that is sometimes harsh and contains occasional swear words.

1984, in the north of England. Miners in County Durham are on strike in protest at the closure of mines by...

Twelve-year-old Wadjda lives in a suburb of Riyadh, the capital of Saudi Arabia. Although she is reared in a...

In Sudan, under an ancestral tree, an old man tells the story of a group of young children. It is the story of...