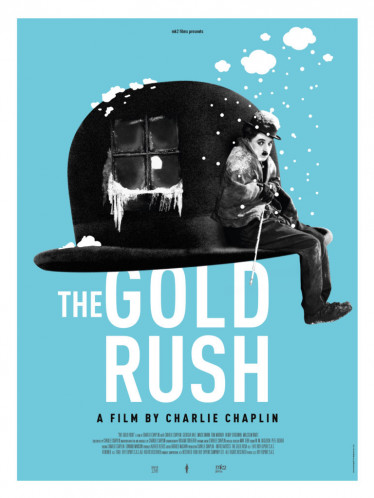 In the 19th century, the discovery of massive gold deposits in the Klondike provoked a huge influx of prospectors. One lone and scrawny adventurer, Charlie Chaplin, gets caught up in a blizzard and only escapes by hiding in the cabin of the outlaw Black Larsen. Then another prospector, Jim McKay, flees the storm to take shelter in the rickety shack. A far more brawny fellow than Charlie, Jim takes on Larsen and gets the upper hand. The three men resign themselves to sharing the hideout. Later, Charlie goes to the neighbouring town and falls in love with Georgia, a dance hall girl...

The Gold Rush is a genuine nugget of the cinema, one of those films that warms the heart. To watch this film again and again as a family is to experience all the human qualities of the cinema. It remains Charlie Chaplin's most successful film and abounds with inventiveness and a variety of jokes that delight and enchant viewers. One aspect of this film that merits emphasis is how well and tenderly Charlie Chaplin portrayed animals as companions on his journey. Bears, dogs, chickens and wolfhounds share scenes with prospectors and dancers, all mingling and matching in a world where the strongest is not always who you think. When Charlie plays with the bears, or when he himself turns into a giant chicken, animals are used to depict the human condition. This is done with simplicity and strong and touching respect. When bestial traits emerge, they never come from the animals but, alas, from people consumed by greed. The film maker highlights the complexity of relationships between people, with a complicit smile, uproarious laughter and sometimes a few tears ... This small man is lost in a vast and snowy land that is simultaneously hostile and warm, and we are happy to be taken along with him on his journey. Each of the characters dreams of nabbing their share of the riches. Gold seems to drive people crazy but what makes Charlie's heart beat strongest is love. As in all Charlie Chaplin films, this one is based on everything he observes and feels. Before every creative process he would dream about and visualise his films, rooting his inspiration in reality. The idea for Gold Rush came to him one night when he was dining with show business friends, Marie Pickford and her husband Douglas Fairbanks. These two big celebrities showed him some stereograms (three-dimensional pictures) of men struggling to clamber up a snow-covered mountain during the Klondike gold rush in the 19th century. He connected this image of starving people beaten down by frigid nature with another historical incident - an expedition of pioneers who got stranded in the Sierra Nevada in 1846. Hunger, cold and isolation wrought havoc. After animals were killed and devoured, some people survived by eating the corpses of children, women and men. They even ate their shoes. Charlie Chaplin used that as material with which to make his work. Several scenes have earned a place in cinematic history, such as the one where prospectors eat their shoes, the one where the cabin teeters at the top of a cliff and, most of all, the one in which Charlie makes bread rolls dance in a scene that has become truly legendary for its unrivalled poetic beauty.

The film is ideal for family viewing for anyone aged 5 and over. He is a character with great dignity despite the poverty that makes him vulnerable. It enables us to empathise with anyone who is suffering and, at the same time, it makes us laugh at our pettiness and mistakes.