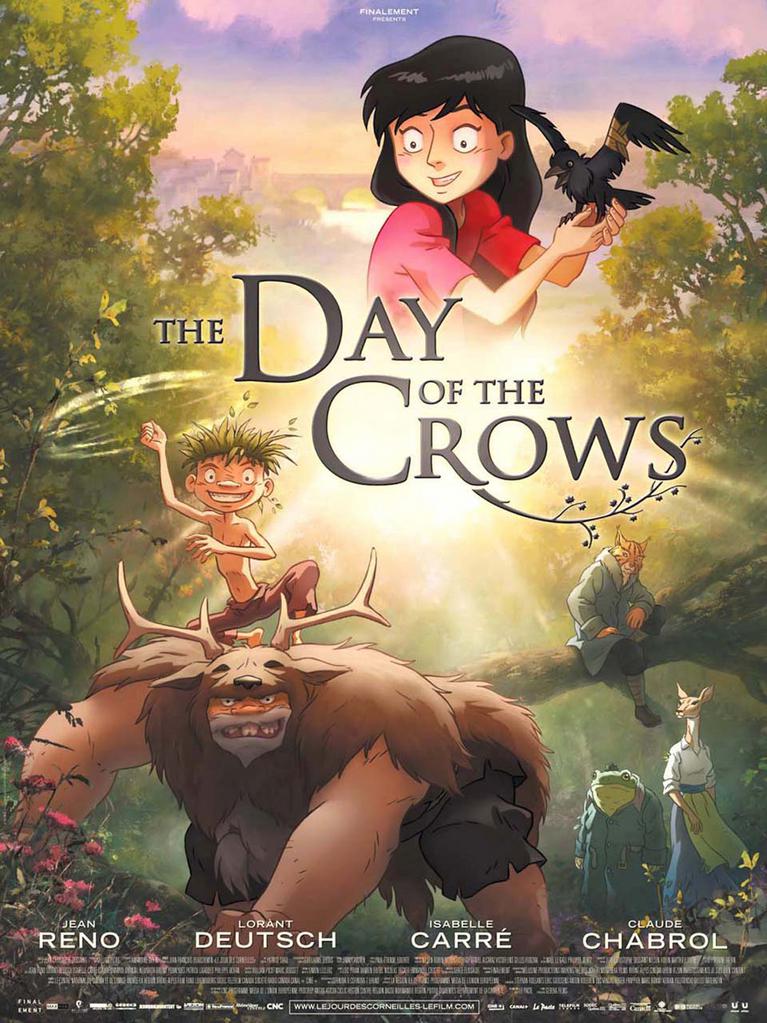 Review by Laetitia Scherier
Fantasy The meaning of life

A father named Courge lives with his son in a forest, far from civilisation. Raised without any knowledge of the world of people, the boy lives like a wild animal, his only friends being enigmatic supernatural creatures. But one day he has to overcome his fears to save the life of his father, who is injured in a violent storm. Soon he discovers what is hidden behind the borders of the forest, and so begins a long process of learning about life and his own origins...

The novel on which The Day of the Crows is based is geared mainly towards adults, but the scriptwriter Amandine Taffin decided to adapted the story to a young audience. Between realism and poetry, the film immerses us in a dreamlike world full of extraordinary characters. It contains all the traditional element of a fairytale: a forest, an ogre figure, a lost hero looking for meaning, the intervention of fantastic creatures, and a love that helps overcome all obstacles. But the originality of this tender and poignant tale lies in the way roles are assigned and its honest portrayal of human relationships. The ogre is wounded by humans and only asks to be loved; magic manifests itself in strange, silent half-human, half-animal ghosts; and the young hero is physically very far from the usual standards of beauty. With his big amazed eyes and his innocent appreciation of this brand new world that is referred to in the film as The Otherworld, he pulls on viewers' heart strings. We find ourselves wanting to protect him from the evils in a society containing both the best and the worst. It is impossible for cinema-lovers to fail to make a connection with Truffuat's The Wild Child, in which the main character discovers, with no little pain, civilisation after living in a feral state. This very elegantly told story about learning subtly explores difficult themes such as bereavement, the fear of others and rejection. The film shines a light on the power of rumours and the way people can lapse into intolerance. The young boy embarks on a long journey that leads him to find out about the ordeal that drove his father into self-exile. His father is the man whose refusal to give the boy a name was the ultimate rejection of human conventions. The film also examines the importance of education and the things we want to pass on to children so that they can make their own way in the world. The transition by Courge's son from the wild to civilisation is handled with a lot of humour and tenderness thanks, in particular, to the character of young Manon, who is able to tame him and help him grow. The picture-like aesthetics of the sets brings to mind the paintings of great impressionists such as Monet. They differ strikingly from the drier and more primitive traits of the characters, which are hand-drawn with black pencil before being scanned and coloured on computer. This assembly method gives the film a very beautiful visual atmosphere and makes it stand out for its originality. The Day of the Crows is a wonderful French animation success, involving an ambitious story that delivers what it promises. Enjoy watching with the whole family.

We recommend this film for ages 8 and over. Some of the topics it addresses are tough, but they are handled with tact and very poetically. The story's humour and steady pace will keep children gripped while stimulating them to think about modern life.

The Moon Man is a quirky character who lives alone on his star, where only children can see him. From his...

I live in the world. But the world is, first and foremost, what happens in my backyard. I would like to invite you here. Whether I live in a city or the countryside, in a rich neighbourhood or a poor one, or in a peaceful country or a country at war, I did not choose to be born here but this is my world. It shapes me and defines me in ways I cannot know, so will I be able to get away from it to free myself? Will I want and need to? There are visible borders (such as a wall, an edge or an enclosure) and invisible ones (beliefs, culture, a real or imagined danger, what my parents think and the ideas they pass on to me, the way people look at me because I live here) between me and the world. This film course invites viewers to discover how cinema addresses the issue of where we live. Each film has its own way of living in the world.