The Big Bad Fox and Other Tales… 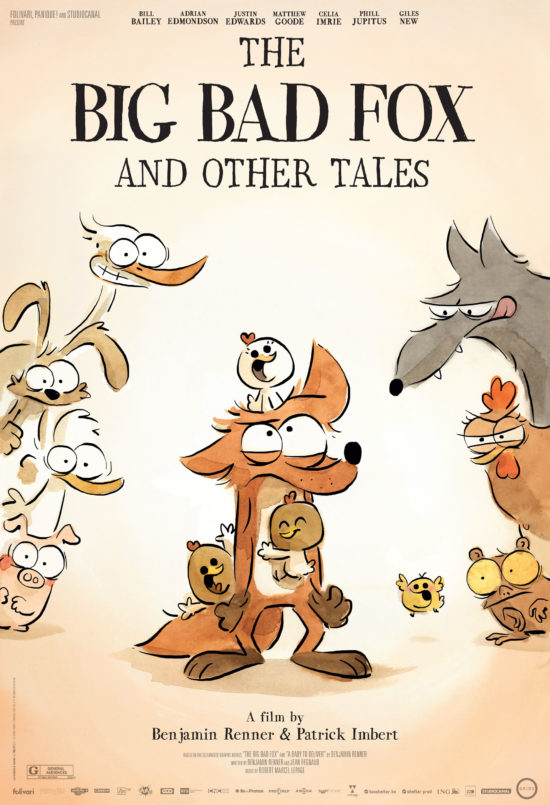 The Big Bad Fox and Other Tales…

The film consists of three 26-minute stories with recurring characters: A Baby to Deliver The Stork claims to have had a flying accident so that he can get rid of a baby that he was supposed to deliver. He lands in a farm and asks a Rabbit and a Duck to complete the job instead. The Big Bad Fox A Fox, struggling to impress the farm animals, decides, after seeking advice from a Wolf, to rob eggs in order to eat the chicks. But when the eggs hatch the chicks mistake the fox for their mother and end up believing they are foxes. We Must Save Christmas It's Christmas on the farm. A misunderstanding leads the Rabbit and Duck to think that they have to replace Santa Claus to save Christmas.

The Big Bad Fox and Other Tales is made up of three stores - A Baby to Deliver; The Big Bad Fox; and We Must Save Christmas - in which the same characters recur. We meet a wonderful gallery of animals who have the traits we traditionally associate with them but, at the same time, we laugh at the marvellously mischievous twists given to these familiar notions: the stork who concocts a way of shirking responsibility for delivering a baby; a chick who rebels against a fox; an incredibly touchy wolf; and an eccentric rabbit and duck. The animals have the same sharp lines as the comic book; they are sketched like cartoons while the sets are carefully drawn with power and humorous details. The sets are split between the farm and the forest, emulating the well known contrast between domestic and wild spaces ... except that here the fox referred to in the title, who has trouble appearing big and bad, winds up hiding out in the farm, and there are chicks who think they are foxes … The confused identities bring the film into the realm of American comedies, as we are whisked into a world that has as much in common with Billy Wilder as it does with La Fontaine and Tex Avery. The directors have not neglected to include little nods to characters that children know well. Thus the three chicks look a little like Huey, Dewey and Louie; we catch sneaky glimpses of a little Totoro; the wolf's appearances are accompanied by the tune from Prokoiev's musical tale Peter and the Wolf; and so on. As the seasons go by, from the birth of the chicks in the spring to Christmas in the snow, the film moves from one story to the other. The whole family is sure to be amused by jokes that will tickle adults as much as children.

The film is suitable for ages 5 upwards but kids younger than that will find it hard to appreciate, as the quirky humour risks going over their heads. Furthermore, in the last episode, doubt is cast on the existence of Santa Claus ... before it is confirmed in a funny, offbeat way.