The Bears' famous invasion of Sicily 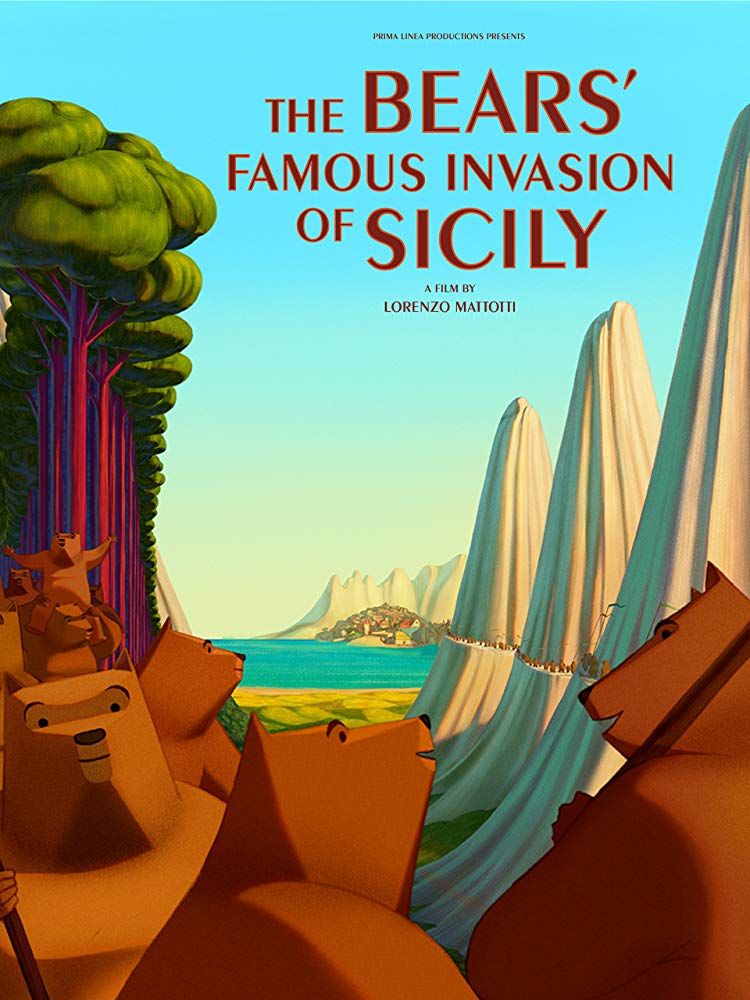 The Bears' famous invasion of Sicily

In the snow-capped mountains of Sicily, a group of bears live under the command of King Leonzio. Distraught at the disappearance of his son Tonio, the king decides to invade the plain inhabited by the humans who kidnapped him. War breaks out before Leonzio eventually finds his son, after which begins a honeyed era of peaceful coexistence between man and bears. But that does not last long ...

The Bears' Famous Invasion of Sicily was born of a meeting of two great Italian artists: the writer Dino Buzzatti and the illustrator Lorenzo Mattotti. The film is an adaptation by Mattotti of Buzatti's novel of the same name, an epic adventure in the Homeric tradition but in which the main characters are bears. As with Babar the Elephant, another classic of children's literature, the bears first encounter with humans is traumatic, in this case featuring the kidnapping of the young prince Tonio. Then, after a conflict encouraged by the General, the despotic ruler of the humans (who is not entirely dissimilar to the tyrannical king in Paul Grimault's The King and the Mockingbird), the fighting ends and an "age of honey" begins, with animals and people living in harmony under King Leonzio. The story could have concluded there, as was the case for Babar, but instead that is where the comparison between the two works ends. Because in The Bears' Famous Invasion of Sicily, the story goes on and grows richer and more complex… The scale of this magnificent odyssey is best expressed in the cinema thanks partly to the exceptional talent of Mattotti. He went to great lengths to give as much depth as possible to the sets, mountains, forests and vast skies, deftly working on colours, space, light and shade. Influenced by artists from a range of very different periods, from Giotto to Caravaggio to Vermeer and the Italian futurists, Mattotti's art is equally impressive on white canvass as it is in dark theatres, where it is enlivened by a subtle mix of 2D animation for the sets and 3D for the characters. It is worth noting that for this work Mattotti also drew inspiration from the drawings Buzzati did himself for his book. So although Mattotti does the voice of one of the most sinister characters in the story, namely the Troll (who is a little like the Cyclops in The Odyssey), it is easier to picture him in the role of Gideon, the film's narrator, and as a "dream merchant", which is how he decribes himself. The Bears' Famous Invasion of Sicily is a rich adventure story and a subtle fable about the relationship between people and animals. Simply put, it is a great film.

The plot is dense and recounted by several narrators from different viewpoints. Children under 7 or 8 will find it difficult to follow, especially as the film has some scenes that may upset impressionable minds, particularly the ones featuring the Troll. But there is no upper age limit for enjoying it!

King Charles V + III = VIII + VIII = XVI rules over the kingdom of Takicardia. He runs it as a dictatorship...

Loulou is a wolf. Tom is a rabbit. Yet they have been inseparable since their earliest days. Loulou, who...