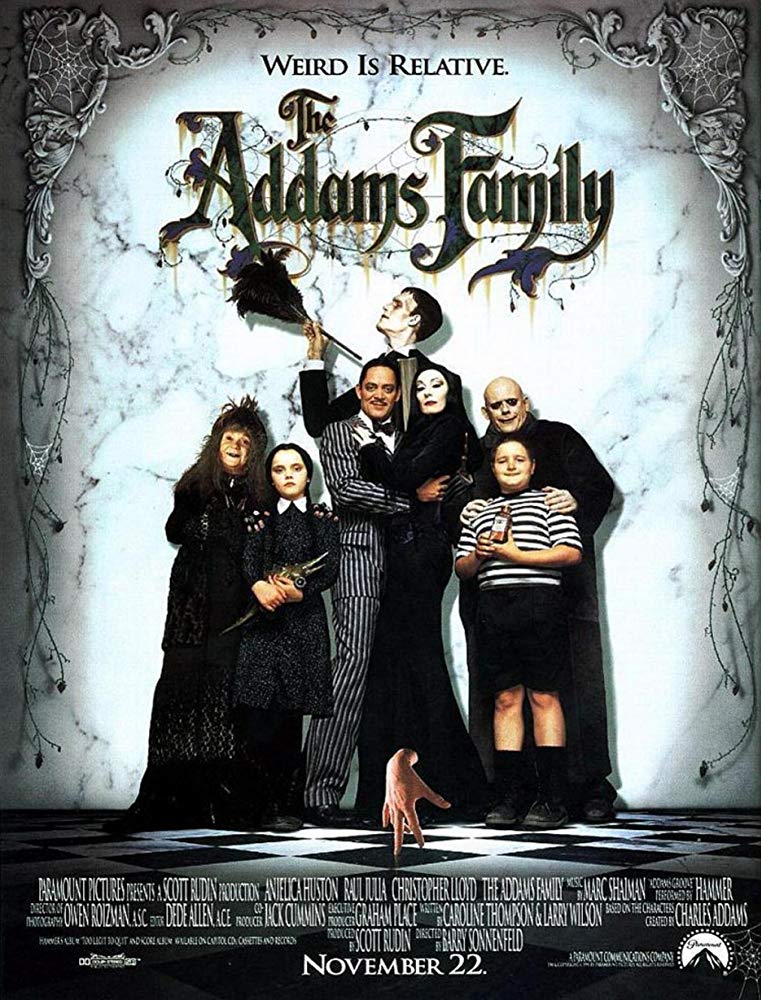 The Addams Family spend deliciously unhappy days in their sinister mansion. While Gomez and Morticia nurture their love of the macabre, their two offspring, Wednesday and Pugsley, amuse themselves by playing increasingly morbid games. The family would be complete if not for the absence of Gomez's brother, Fester, who has been missing for many years. When he reappears, it is a time for reunification, but also for suspicion. Although he is as pale as he always was, Fester has undoubtedly changed. The family begin to wonder: is this really the horrible uncle they adore or is it an impostor trying to trick them out of their fortune?

Welcome to the lugubrious world of the Addams Family, where the bizarre is routine and craziness reigns! This 1990s cult film left an indelible memory on a whole generation of cinema buffs, who could all click their fingers along in unison to the famous opening credits. But the main reason that this uproarious comedy made such a deep impression is the array of brilliantly quirky characters, who are instantly recognisable by their deathly complexions. The roles of the family members are performed superbly by a high-class cast, with each member contributing their own dose of originality and absurdity. Viewers will not easily forget "Thing", a wandering, disembodied hand that serves as a kind of household pet. Similarly, Cousin Itt is a highly unlikely character! By handling black humour with skill, Barry Sonnenfeld offers us a wickedly funny and irreverent comedy. The film's offbeat and corrosive tone really hits the spot, from the two children playing "Does God exist?" by electrocuting each other under the loving gaze of their mother, to the anatomical dishes concocted by the grandmother, to the desecration of the family cemetery on Halloween night! Through this unusual family, the film praises originality and difference while also offering a critique of traditional American society and its orthodoxies. A perfect example of this is the children's gory show, which makes for an irresistibly funny scene! Young cinema lovers will also enjoy discovering the mansion's Gothic set featuring all kinds of strange and magical objects. The home is a fully-fledged character in the film. It is a pleasure to get lost in its labyrinthine bulk, where every object seems to be a hatch hiding a secret passage. This hilarious fantasy-filled comedy makes for ideal family viewing at Halloween.

We recommend this film for ages 7-8 and over, by which time kids can fully appreciate the offbeat humour of the macabre jokes with which the film is riddled. Children younger than that may not understand, or may be scared by, the dark humour and the rather gloomy atmosphere in certain scenes Adults will be tickled by the subtexts that pervade the film, especially in the dialogue between Morticia and Gomez...

Hector is a health and safety inspector and his job takes him to Zombillenium theme park. He soon discovers...