That man from Rio 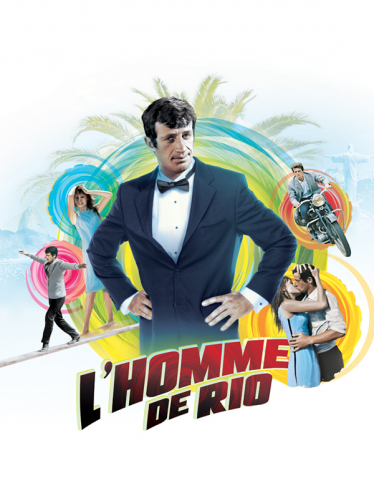 That man from Rio

Airman Adrien Dufourquet witnesses the kidnapping of his fiancée Agnès, the daughter of a famous ethnologist. He vows to get her back. His quest takes him to Brazil, where he exposes a trafficking operation involving South American Indian statuettes.

The collaboration between Jean-Paul Belmondo and Philippe de Broca was one of the most fruitful in the history of French cinema (resulting in The Tribulations of Chinaman in China and Le Magnifique among others) and That Man from Rio unquestionably represents its high point. In this rattling good adventure film, action and humour go together with an almost magical alchemy. After the gallant hero's beloved is captured by bandits, he must cross the Atlantic to rescue her in a country that is totally alien to him. So he has to be clever to dodge the many traps and pitfalls in his way. Speed goes hand in hand with action but it also enables us to literally take off to new horizons, whether that be by foot, car, motorbike, plane or boat. Whatever the mode of travel, the landscapes (city, jungle, desert, etc.) hurtle by at a rollicking pace. As a film maker who prizes movement, De Broca propels his character into a pulsating chase on the other side of the world, as if hailing an adventure as an exercise in perpetual motion, permanent restlessness, a lust for mobility. There is no down time for the hero, who never gets a chance to catch his breath because stopping means being overtaken by death. He has to continually dig deeper to find more strength and courage in order to escape from his enemies and achieve his goal. The theme of a hero in a race against time in which he faces endless dangers is not very far removed from Hitchcock's cinematic work. In particular, the scene where Belmondo is pursued through sandy alleyways being built in Brasilia is a clear nod to the famous scene in North by Northwest in which Cary Grant is chased by a plane through a cornfield. Jean-Paul Belmondo and Françoise Dorléac kind of bring to mind characters from screwball comedy, a sub-genre of Hollywood comedy. Like a Howard Hawks female character, Françoise Dorléac puts in a delicious performance as a nice trouble-maker who drives Belmondo crazy. What is more, That Man from Rio contains numerous references to the Adventures of Tintin. Fans of Hergé's work will have no problem spotting them. Like the famous boy reporter, Jean-Paul Belmondo is a hero as pure as he is brave, dashing across the most exotic countries and using ingenuity to defy all obstacles. The actor's acrobatic feats create some legendary action scenes. Entertainment, suspense and cartoons are all to the fore in this classic French adventure film. A chase that little cinema lovers will not forget in a hurry!

For children age 7 and over.

Roger Thornhill is endlessly charming. Elegant, vibrant and funny, he is an influential advertising executive...

Iris Henderson is spending the night in a hotel in the Balkans before taking a train back to London. There she...