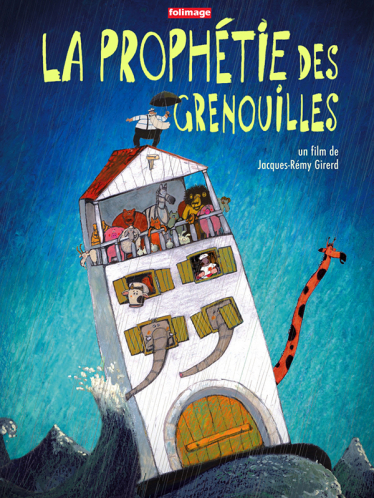 Tom lives peacefully with his “grandfather” Ferdinand and his “mum” Juliette, his adoptive parents. Bu their tranquil lives are thrown into chaos when the world is hit by a flood that frogs felt coming but of which humans knew nothing. Ferdinand, Juliette and Tom round up the animals from the nearby zoo and take them on to a makeshift boat, along with little Lili, whose parents, the owners of the zoo, are away in Africa. This motley crew must not only survive but also teach the animals to live harmoniously together … which is no easy feat.

Enjoyed both by young and older viewers, "Raining cats and frogs" takes up a Bibilical theme – of a great flood, an idea that also features in legends from other cultures – but dispenses with the religious overtones to make it a universal story. Director Jacques-Rémy Girerd returns to themes he holds dear – descent, difference and family – and gives them fresh resonance with a film that delivers a modest message with an ambitious style. The story is particularly effective, and suspense is maintained throughout: will they last until the water subsides? The animation is especially precise, almost alive: the flood feels remarkably bracing and credible. On top of this technical prowess, there is a real narrative intelligence: the flood is a device that carries a tribute to the acceptance of others. In order to survive, people, animals, different generations and species are forced to cohabit on an improvised ark. But it's not easy. Between grievances, hunger and the natural obligation of each creature to obey the law of their own species, the ark is not threatened by the climatic events on the outside so much as by what is going on inside, among its inhabitants. Through a succession of twists, haggles and ordeals, Girerd serves up a tale with universal appeal. The lesson? To live together you not only have to accept others' differences but also be able to give up a part of yourself. This message, more original than it appears, is relayed with caustic wit through very colourful characters and great visual inventiveness. All of which makes for essential viewing!