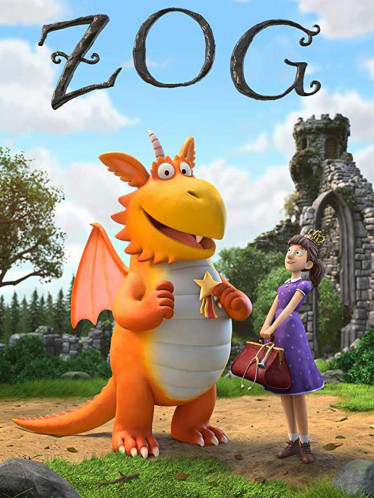 Zog is a young, clumsy and lovable dragon who dreams of becoming the top pupil in his class. To succeed, he has to show great determination and perform many feats, such as capturing a princess...

Zog imagines himself as a strong and fearsome dragon. But the truth could not be further from this fantasy ... for, in reality, he is sensitive, clumsy and endearing!

Nevertheless, he strives to fit the image and live up to expectations as best he can. In spite of his efforts and tenacity, he cannot earn the famous golden star, which is awarded to the best dragon after each test of the year. The narration, which is built on a system of repetitions, lists the failures that he keeps racking up. Viewers develop genuine empathy for this character who does not give up his fight.

The meeting with Princess Pearl is decisive in the path he then chooses. Pearl sees Zog for what he is. She grows fond of him and becomes his ally. She shares the same issues as him and, as such, is also struggling to stay in the box assigned to her. She feels capable of so much more than the role of princess permits. "I am not made for this," exclaims each of them.  Even the knight, Sir Gadabout, reveals that he is trapped in a mission that does not suit him.

But there is strength in unity! Together, they defy the purposes assigned to them and ultimately liberate themselves by asserting their individuality. They prove their courage by refusing to be put off by stern looks from others and continually seeking fulfilment. They also free up their creativity as they decide to start up an innovative company that benefits society.

Zog is a film that questions norms and invites viewers to wander off beaten tracks.  It invites everyone to reflect on what true happiness means beyond the clichés. Society tends to promote the values of strength and competition and encourage success at all costs, to the detriment of individuality and imagination. "The world's already far too full of cuts and burns and bumps,  " declares Pearl quite rightly. With a lot of tenderness, thanks to digital textures evocative of clay and soft colours, Zog offers elements of an answer to that question.

We recommend this film for ages 4 and over. These famous characters from fairytales, the tender graphic universe, the way the film is made and the values it conveys will all delight young and old viewers alike.