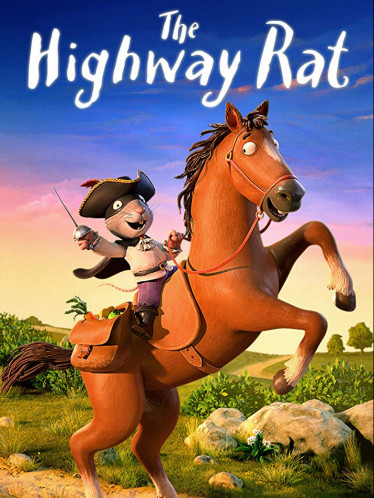 A rat wreaks havoc by stealing food from the weakest. But one day he meets a duck who is much cleverer than him...

After, among other works, the famous Gruffalo and Stickman, the Highway Rat is part of the successful adaptations of the illustrated books by Julia Donaldson and Axel Scheffler. We follow the adventures of a masked rat who wears boots, a cape and a sword like a musketeer. But he is not driven by a desire for justice, he is motivated by greed, telling the animals he encounters that: "Whatever I want, I take! " After scoffing a delicious cake stolen from a white goose, our hero develops a special appetite for sweet treats. He winds up trying to satisfy his cravings in unexpected fashion, as he abandons his highway bandit ways.

Like the other films mentioned above, this work is faithful to the original illustrations but adds a very fine stop-motion animation, which is computer generated with figurines. The story is told by an off-camera narrator and rhyming verse that lends the film a dynamic and fun tone and builds up to a very surprising end. You can tuck into this film as if it were one of the delectable pink cupcakes that the highway rat gorges on at the start of the film!

For age 3 upwards for the characters in the story, and age 4 for enjoying the verses.