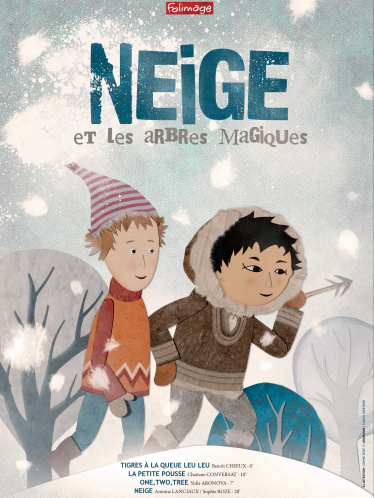 Just before the summer holidays begin, Prune leaves her parents for the traditional "end of year school outing". But an incredible snow storm hits the town...

The heavy snowfall alters the appearance of our daily world. The film is built on this notion that is shared by parents and children and which become a graphic and narrative concept to the point of bordering on a fantasy story: firstly, an arctic fox appears on a street corner and an arctic owl is seen in the school windows, then there is a seal, an ibex, a whale, a polar bear and a whole cavalcade of creatures from the Arctic circle, along with an Inuit family, all of whom meet Philémon, his sister Prune and their parents.

The film is made with cut paper and plays with the various elements that comprise its universe - including a snow storm, an ice pack, wind, mist and the ocean - while recounting the story of a meeting between two little boys, Philémon and Kulluc.

The pair have no common language but recognise that they have similarities (both recently lost a tooth, both have a sister, either older or younger, and so on) and manage to share the things unique to them (how to hunt a seal, living in a house or an igloo). It is, first of all, a lovely story about a friendship that appears with the snow and endures after the thaw.

Ideally for age 5 and over but 4-year-olds may enjoy it if some of the script's subtleties are explained by parents.