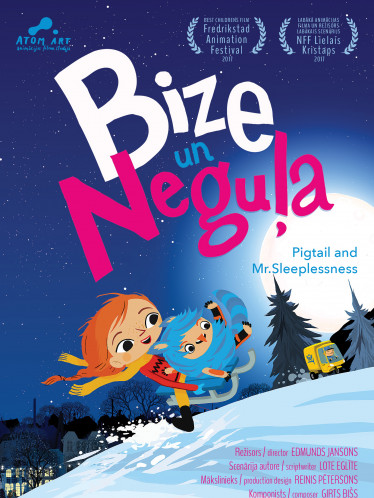 Review by Marie Horel
The meaning of life

Pigtail, a six-year-old girl, wants to spend her Christmas holidays learning to ice skate with her father. But that plan is upset when a baby brother appears - she had been expecting a little sister - so Pigtail, with the help of her imaginary friend Mr. Sleeplessness, makes a strange request to Santa Claus…

Amid the atmosphere of a snow-covered Christmas, the film tells a story revolving around Pigtail, a bright and enthusiastic young girl who loses her bearing when a baby arrives in the family. She had wanted to learn to ice skate with her dad; instead she has to while away the time with her grandmother until her parents get back from hospital. Having been used to being the sole centre of attention for her parents, Pigtail tries to find a solution to get rid of her little bother by asking Santa Clause to send him to ... the Moon! So humour is in regular supply as the film shows how this little girl learns. She experiences adventures, jealousy and rebellion, as well as love for her family. Pigtail and Mr. Sleeplessness is a tribute to the girl's imagination, as she manages to overcome her fears and jealousy thanks to her imaginary friend, Mr. Sleeplessness.

With a playful spirit, this film relates an original Christmas story blending sweetness, poetry and mischief.

Children from the age of 4 will enjoy the story and the appearance of Santa Claus! The film will strike even more of a chord with children who have a little brother or sister. Kids older than 7 may find the story a little childish.

"Do you believe dreams come true? " This is how a cricket who jumps from home to home grabs the attention of...