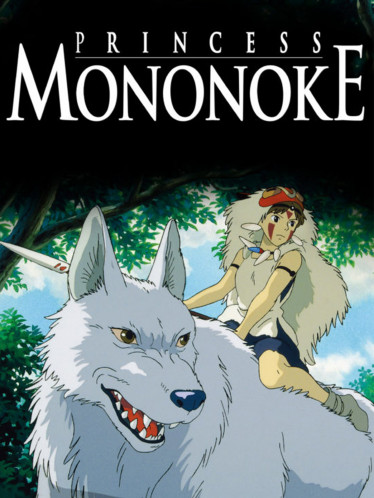 The story is set in medieval Japan (the Muromachi period). Ashitaka, the prince of the Emishis tribe, is struck by a curse after killing a boar god who had turned into a demon. The village's wise woman tells him he is condemned to become a demon himself. He sets off on a mission to "look upon the world without hate" and to find the source of his curse and a way to undo it. In the forest he finds himself caught up in a war between spirits, gigantic creatures who have the gift of speech (there is also San, who is the Princess Mononoke raised by the she-wolf Moro). Added into the mix are two human parties with contradictory interests: Lady Eboshi, the leader of the ironworkers, who wants to raze the forest so that her people can get rich; and Lord Asano, who, with the aid of his samurais, aims to conquer Irontown to take control of the iron.

The battle between humans and natural spirits is a metaphor for man's destruction of the environment and is rendered through a sumptuous and epic artistic work. With accompaniment from majestic, lyrical or mysterious music by Joe Hisaishi, Miyazaki's film offers sublime visions while ensuring we are captivated by the action. He achieves a very refined realism in the way he represents nature, especially the remarkably enchanting forests. The appearances of Princess Mononoke and the Deer God are unforgettable moments of poetry. Miyazaki fully demonstrates his talent for blending parts of Japanese culture - in this case a depiction of the legend-rich Middle Ages - with the essential elements of European fairytales and adventure stories. The scale of the mise en scène is astonishing and invites us to accept mysteries. The character of Ashitaka, with his arm gnawed by the curse, presents us with another analogy, that of the hatred that each of us must tame within us. He serves as a messenger and strives to reconcile the opposing instincts represented by Lady Eboshi and Princess Mononoke. But nothing is clear cut in this Japanese tale, which magnificently presents the nuances and ambiguities of human feelings. Thus Ashitaka wavers in his quest but tries to look at things without hate; and Lady Eboshi wages a ruthless war in her bid to wipe out the animal gods but, at the same time, she gives lepers back their dignity. In this fortified town where the foundry is the dominant business, the roles of women and men go against stereotypes, and the attitude of the former prostitutes exudes great humour and mischievousness. The film depicts an apocalyptic world in which Miyazaki gives expression to his ideas organically. So there are kinds of hustling worms who represent the evil spell at work, and an oil spill that overruns nature when it is on the cusp of extinction. His vision of nature is neither naive nor idyllic and, though infused with fantasy, it does not deny its cruelty. In this story full of noise and fury, the relationship that blossoms between San and Ashitaka gives rise to hope of a reconciliation and moments of great beauty.

From ages 10-11, owing to the complexity of the story and the violent action scenes that would not be out of place in a manga.

Ann Darrow, an out-of-work blonde actress, is hired by the director Carl Denham to star in his next film. ...

Eighteen-year-old Sophie works tirelessly in the hat shop that her father ran before he died. On a rare outing...

The Boy who wanted to be a bear

A mother bear loses her little baby bear after escaping from a pack of wolves. The father bear then decides to...