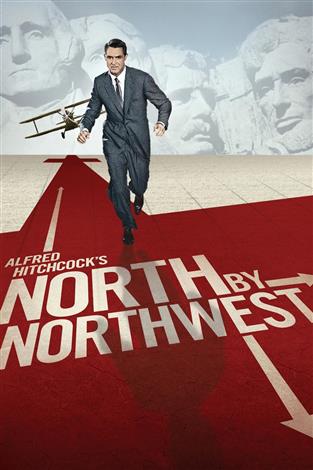 Review by Agnès Dupuy
All-time classics Adventure all the way

Roger Thornhill is endlessly charming. Elegant, vibrant and funny, he is an influential advertising executive with the gift of the gab, always able to captivate his friends and lovers. He is the master of everything around him in New York. Except chance. Here chance takes the form of his little finger, which he happens to raise in a hotel lobby at exactly the same time as there is a call for someone else, a certain Mr Kaplan. That leads to him being kidnapped by criminals who think he is the Kaplan in question, a member of the secret services. They try to bump him off but, thanks to his survival instinct, he manages to escape. But the living nightmare goes on with remorseless logic and neither the police nor his lawyer, nor even his mother, can believe what is happening to him. The chase continues right across the country, with Thornhill relying on nothing but his ingenuity to track down the real Kaplan ... if he actually exists. And if he doesn't exist, who is everyone chasing?

When Hitchcock was asked to summarise this film, he smiled and told this anecdote: "At the start, all sorts of things happen to the hero with such bewildering rapidity that he doesn't know what it's all about. One day Cary Grant came up to me and said: "‘It’s a terrible script. We’ve already done a third of the picture and I still can’t make head nor tail of it.’” " ... he didn't understand the script but, without realising it, he said it while using part of the dialogue! ". So Cary Grant found himself craftily placed into his character's predicament. Even if it may be hard for a child under 10 to grasp all the intricate machinations and U-turns between spies and double agents, everyone will understand the underlying issues: the quest for identity and recognition, as well as love and betrayal. In reality, the movement of the film is what will captivate young and older viewers. And even if some people do not get the wicked allusions in the dialogue, no one will have trouble appreciating its radiant power. "So then, is she the baddie? Or is he a traitor? " people will wonder, while noticing that baddies can be very seductive, polite and elegant. "How is he going to get out of this? " when everything seems to be set up to ensure that he can't? The beauty of this film lies in the way the hero finds solutions, which do not come shallow special effects or an all-powerful scriptwriter who intervenes to save him miraculously like a magician pulling a rabbit from a hat. On the contrary, in this film the suspense is cranked up high and children will be able to piece together the tangible way out of every apparent impasse. This active participation is all the more enjoyable because the solutions are flawlessly logical, like the one that the hero comes up with when surrounded on all sides in a plush sales room: all the exits are blocked by armed killers - so the only way out is to use intelligence. The visual power of technicolor and dizzying changes of scale tied in with the hypnotic music of Bernard Herrmann (including the stunning fandango that grabs us from the very start) further enhance a film that will be a major cinematographic experience for young viewers.

Recommended from age 10 upwards so that children can understand the complex plot and twists. But kids from age 8 will be gripped by the suspense and captivated by chases on foot and in planes, train and automobiles across the whole United States. Watching this as a family, with young and old together, will make this a more powerful experience.

The title has it right: this story is truly incredible ... and yet true ... because the man who tells us it...

In 1931, Hugo Cabret, a 12-year-old orphan, lives in the walls of Montparnasse train station in Paris. He...

Iris Henderson is spending the night in a hotel in the Balkans before taking a train back to London. There she...

A woman has just been assassinated. Her body is lying on the beach. As bad luck would have it, young Robert...