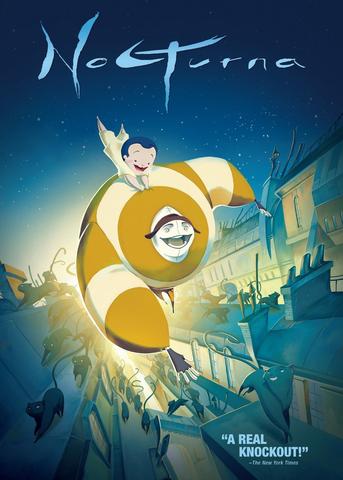 Tim is rejected by the other kids in his orphanage. He is scared of the dark, and likes to confide in his star, Adhara. One night, while he is out on his roof gazing at the stars, he sees his star disappear mysteriously. Astonished, he loses his balance and nearly falls off but is saved in the nick of time by the Cat Shepherd. Tim discovers that when the moon is providing the only light, the city becomes overrun by magical creatures who control the night: that is the marvellous and alarming world of Nocturna. But what is that strange and menacing shadow that roams in the environs and eats the light? The young boy seems to be the only one who can solve this riddle ... and thus begins a wonderful coming-of-age story. As ne navigates his way through encounters and challenges, Tim learns to overcome his anxieties by demonstrating intelligence, solidarity and, above all, courage.

For their first feature film, Victor Maldonado and Adrià Garcia whisks us into a dream-like universe in which the mysteries of the night are revealed. Whether it's a sleeping child, a dream, a missing sock, tangled hair or banging shutters, nothing is left to chance by Nocturna's many magical creatures who work hard to make sure that night runs smoothly. Everything is organised meticulously like in a major company in which every employee has a role, a bit like in Monsters, Inc. We are introduced to a cast of nutty, poetic, funny and even worrying characters. This fantasy world running alongside the real one is presented through the eyes of Tim, a small orphan who is rejected and a bit odd and with whom viewers can easily identify. The theme of a child's coming-of-age adventure that shifts suddenly into a marvellous world is cheerily reminiscent of Alice in Wonderland or the Wizard of Oz. This film addresses universal anxieties about the night such as nightmares, bed wetting and especially fear of the dark, which is personified here by a threatening and destructive shadow that is at the heart of Tim's quest. The film is conceived as a cathartic experience; the directors explain that "through this world laced with poetry and emotion, [their] dearest wish is that the memory of this film remains with children (and why not parents?) and helps them overcome this persistent 'fear of the dark' on a daily basis." The film also teaches us that confronting anxieties is a difficult, obstacle-strewn route that is best navigated with good company so that you can grow and become comfortable in society. Nocturna is a beautiful animated tale set in an uncertain time and space. We recognise the architecture of 20th-century European cities, with warped buildings like something out of German expressionist cinema and foggy streets from film noirs. The lines are thin, the colours surprising and the graphic style original. The directors aim to animate "a child's representation of the city at night" by mixing "elements plucked from children's imagination and [their] own cultural vision", and they draw on many influences! These include film makers such as Miyazaki, Burton and Jeunet, comic book creators such as Tardi and children's book illustrators like Klaus Ensikat, Edward Gorey and Arthur Rackham. The result is a film in which toy-like characters operate in a unique and surreal universe between dream and nightmare, where light is used to tremendous effect. The directors said that the traditional animation technique allied to 2D computer graphics was the perfect medium for creating an imaginary world with the goal of "immersing viewers in a visual experience that plays with the concept of a book that comes to life." The music, which was composed by Nicolas Errèra, contributes fully to the film's special atmosphere. Indeed, the scene with the concerto of night-time noises is simply magnificent! The soundtrack guides the viewers' emotions, balancing them wonderfully well. We laugh, we feel fear and we hold our breath. From moments of poetry and races against time, the film is well paced and we are never bored for a second. So, like Tim, let yourself be transported into the fabulous world of Nocturna, because you will not be disappointed by the trip!

We recommend this film for ages 6 and over. The story is complex and the film's duration and occasionally worrying atmosphere would not be suitable for very young viewers.

The Moon Man is a quirky character who lives alone on his star, where only children can see him. From his...

The thinking in Monstropolis is that human children are toxic, so they inspire great fear. Yet children's...

While her big sister reads her history lesson to her, Alice, a little girl with an overflowing imagination,...

Why does the moon change shape? Is it made of cheese? What happens at night while we sleep? Curious young cinema lovers who like to dream can look to the sky and boldly go on a cinematographic journey across new frontiers... These seven films are for anyone age 7 or over who is eager to discover new worlds and meet robots, extraterrestrials and other celestial creatures.