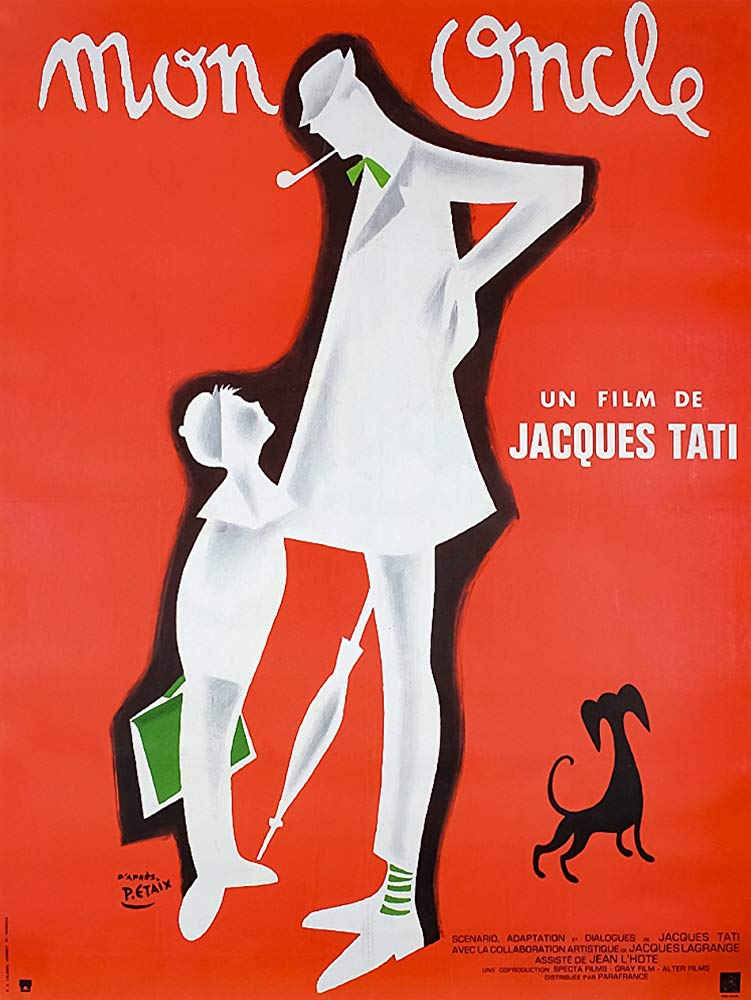 It is the late 1950s. Monsieur Arpel lives with his wife and son in a very modern house, equipped with absurd and useless technological gadgets that never fail to amaze guests. The wife's brother, Monsieur Hulot, is a man from another time, very different to Arpel. He is an unemployed and clumsy dreamer. Monsieur Arpel finds him a job in factory in order to keep him busy and far from his son, who loves playing with his uncle.

My Uncle is a film that straddles two worlds: the old, in which Monsieur Hulot lives, and the new one emerging in the late 50s and beginning to eclipse the previous one. Monsieur Hulot is between the two. He does not reject modernity but, all the same, he feels more comfortable in his small working class neighbourhood where he is spared all the shiny urban transformations and where everyone knows everyone else and people talk to each other. The film has the slow rhythm of country life. Jacques Tati's slapstick is nothing like the frenetic paced Hollywood slapstick of the early 20th century. The laughs are less thigh-slapping, more subtle In My Uncle, time stretches out and wastelands proliferate between old and new neighbourhoods. Right from the opening credits the architectural aspect of the film is clear. My Uncle opens with a public works building site. On the board that would normally give details of the construction project in progress, we can read the names of the main people involved in the making of the film. The cinematographic adventure is a collective and human one. In an era when industrialisation was seen chiefly as progress, My Uncle invited people to wonder about what makes a society happy and well. Thus it puts people, more specifically the relations between people, in the foreground. But we cannot forget that Jacques Tati is a slapstick film maker. So My Uncle, Tati's third feature film - following Jour de Fête and Monsieur Hulot's Holiday - is no dull parable. Quite the opposite, it offers brilliant caricatures of superficial and ridiculous city-dwellers at the cutting edge of modernity, but also of the chatty, over-the-top fun-lovers living in a neighbourhood that feels like a village. The only difference is that his treatment of the latter is a little more tender. Villagers, in this film, come across as much less individualistic than city slickers. On one side, there is life; on the other, life is hidden behind an absurd decorum spawned by the new consumption society. The only people who stay the same no matter their living conditions are children, who only ever want one thing: to have fun. This focus on fun, the lust for freedom, is what slapstick cinema and childhood have in common. Through his gaucheness and innocence, Monsieur Hulot highlights the dysfunctional aspect of items that were designed without thought for their practical purpose, but the way the gags are presented makes this excess poetic and amusing. So excess is not as useless as it seems. It becomes part of the art, which addresses the senses as much as the mind. My Uncle is the first film in which Jacques Tati expresses so clearly his taste for form, design and modern architecture, none of which stops him from being conscious of the new trend's dangers of dehumanisation and individualism. Was Jacques Tati not a visionary, in his own way?

My Uncle is the second part of a trilogy that began with Monsieur Hulot's Holiday and concluded with Playtime. Children can watch these films in the same order in which they were released. So anyone from the age of six is advised to watch My Uncle after seeing Monsieur Hulot's Holiday. Playtime, on the other hand, is more difficult to grasp. It is best to wait until early adulthood to enjoy that one.