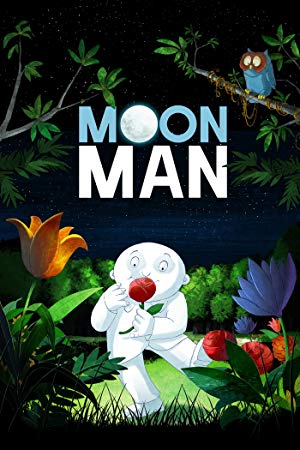 Review by Céline Maya Latour
Fantasy The meaning of life

The Moon Man is a quirky character who lives alone on his star, where only children can see him. From his lofty perch he observes space and dreams of exploring it. One day, he grabs on to a passing comet and crash lands on Earth. Thus begins an amazing adventure: Moon Man discovers our planet and has a multitude of curious encounters. He meets plenty of characters who want to be his friend, but also runs into the president of the world, who treats him as an extraterrestrial invader and vows to chase him down...

Moon Man is adapted from the book of the same name written by Tomi Ungerer, a master of children's literature. Director Stephan Schesch worked with Tomi Ungerer to make sure he kept the tone of the book both in the narration and the graphics. The result is a very poetic graphics universe interspersed with entirely hand drawn artwork and a range of colours that transmit the chiaroscuro technique, blending magnificent, shimmering colours with ubiquitous darkness. The screenplay was embellished by the director and Tomi Ungerer himself: so we meet new characters such as the little girl from the drive-in (who appeared in the background in the book) and the president of the world. Viewers can distinguish several layers when appreciating the film: children will enjoy the dream-like quality of it and happily let themselves be carried along by the poetry of the Moon Man's journey, while older viewers may see a more political dimension as well as a number of cultural references, such as the main character's moonwalk -. The soundtrack is very varied, drawing on four different styles to reflect the four main plot leaders (Moon Man, Ekla of the Shadows, the little girl and her father, and the president of the world). This gives the film great diversity. For example, we hear Louis Armstrong perform "Moon River" during the sublime scene when the Moon Man is carried by the river into dense vegetation, and another scene is surprisingly accompanied by Iron Butterfly's "In a Gadda da Vida". We experience an array of atmospheres that mesh beautifully with the graphics, while young and old alike will be stirred by the themes raised (such as solitude, difference, the abuse of power, friendship and nature). A triumphant adaptation, following on from the already remarkable film The Three Robbers, which was released in 2007.

The orphanage is a sad and fearful place run by a tyrant of a manager who exploits her "dear children" by...

Once upon there was a farmyard where roosters, chickens, ducks and geese lived happily together. That changes...

Why does the moon change shape? Is it made of cheese? What happens at night while we sleep? Curious young cinema lovers who like to dream can look to the sky and boldly go on a cinematographic journey across new frontiers... These seven films are for anyone age 7 or over who is eager to discover new worlds and meet robots, extraterrestrials and other celestial creatures.