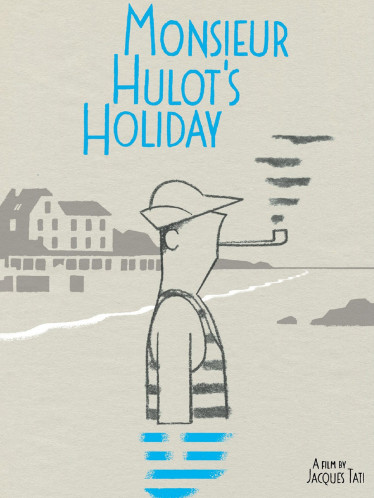 As holiday makers invade a peaceful resort on the Brittany coast, Monsieur Hulot, a gangly and eccentric single man, arrives at the wheels of his sputtering old car. No sooner does he enter his beach-front hotel than he starts triggering hilarious gags and calamities. He is friendly and full of good intentions but, being as clumsy as can be, he disrupts the tranquillity of the place and spreads mayhem among residents who just want a bit of peace and quiet.

Discovering Monsieur Hulot's Holiday is a bit like attending the birth of one of French cinema's most famous characters. With his pipe, his trousers that are too short and his countless gaffes, Monsieur Hulot is a grain of sand in the well oiled machine of middle class holiday society. His holidays turn into a polite and warm-hearted satire of a post-war France in which people started enjoying paid leave. From the first minute of the film, the simple and effective gags follow one after the other, underlying the perpetual contradiction between this unusual character and everything and everyone around him. The ingenuity of Tati lies in how he uses imbalance, postures and gestures. This is much more than a tribute to American slapstick films, as Tati reinvented the genre with his constant innovation in terms of the use of sound, which is one of the most fundamental comic devices in his work. In addition to the complex sound and musical arrangements, he totally masters the look and feel of his film, with everything choreographed down to the slightest detail, and he had a finely honed sense of framing. Anything superfluous is removed so that the picture - and the gags - are as clear as possible. Furthermore, Tati uses sequence shots and long shots with substantial depth of field to underline comic situations and the split between things and people who are in the same place but do not mix. Monsieur Hulot makes us laugh but what charms us above all is the talent and poetry of this artist who, both as director and a performer, profoundly influenced the history of cinema. This is a pure masterpiece of slapstick cinema and is a treat to discover (or rediscover) in this magnificently restored version.

A film for the whole family. Even though the sound processing can sometimes seem a little jarring, viewers are swept along by the film's crazy look and feel. There is a constant stream of ever more funny gags that get viewers of all ages laughing out loud. Consume without moderation from ages 6 to 99.