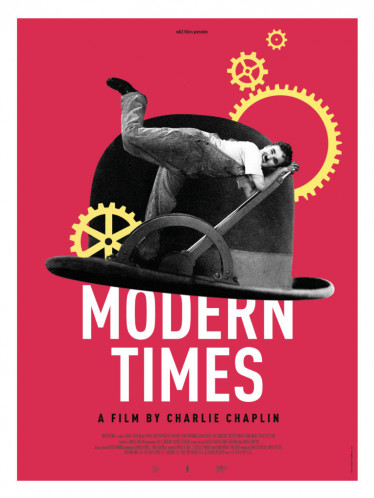 Charlie Chaplin works on an assembly line in a big factory. His daily duty consists of tightening nuts. Very quickly alienated by the working conditions and the hellish pace demanded from him, he suffers a nervous breakdown. He starts tightening everything that comes his way and spraying people with his oil can. As a result, he winds up in hospital. As soon as he gets out, he is mistaken for a communist trade unionist. Chaplin is taken to jail but is soon released thanks to another mix-up. Then he meets a destitute young woman with whom he tries to navigate a way through the city's traps...

This great film is unique both for its form and its subject. It is simultaneously a classic and modern and it still strikes a chord today, as economic liberalism alters our societies. So which modern times are really being addressed in this social, political, economic, satirical and romantic comedy? Charlie wakes up in a world where everything is dictated by the speed at which machines work. Every day, thousands or works get off their trains and go to a factory. The giant clock that appears in the opening scene governs the movement of this human tide down to the very last second. It also represents the agent of power, since whoever controls time controls everything. Hence the boss meticulously monitors the rate of work of his employees and even wants to use breakfast time to maximise their productivity. Every sequence in the factory positively radiates inventiveness and political comment on modern capitalist society. Several scenes are simply unforgettable, like the one with the factory that swallows up men or the eating machine, which leads to an incredible slapstick torture scene. Chaplin always had a unique ability to make us laugh while making us sympathetic and understanding witnesses to the story. Thus we understand the young girl who steals bananas like a proud pirate when she appears for the first time. On the other hand, we do not comprehend how a rich society can tolerate and accept social misery. Beyond its many jokes, the film wants us to think about that. Is work enough to make people happy and to define their wealth? What is the purpose of these modern times if a worker can no longer meet his family's basic needs? What is going on in an era where men and women are compelled to steal from big stores when wealth is everywhere but not for everyone? This fight for dignity, in which a man refuses to carry on acting like a sheep to survive even if that means getting beaten up and locked up many times, makes us laugh and think in equal measure. A utopian love is the only vital force that enables the tramp played by Chaplin to keep bouncing back. This force gives him wings and the strength to fight for his girl even though he is scrawny and to join the working masses and seek yet another job in spite of the recession, police oppression, hunger and cold. Made like a reel showing the ordinary life of a poor man, Modern Times remains relevant beyond its own era. It is still pertinent today, with its glowing humanity evident in its yearning to give the dispossessed back their purchasing power. Chaplin makes clear that happiness is not about having or buying things, as these things are all temporary, even if owning a house and a car and having a job and money are necessary and should be within reach of everyone irrespective of social class. But, in reality, what is most sad is the lack of solidarity, the refusal to share wealth. The only unique and tangible thing is love and being together. The ending with two figures full of of hope heading off in the rising dawn remains one of the most beautiful endings in the history of cinema, often copied, never equalled.

This is a film for the whole family from age 6 upwards, with just a few pieces of dialogue that can be read easily.

In the 19th century, the discovery of massive gold deposits in the Klondike provoked a huge influx of...

In 1918, a humble soldier from Tomainia suffers amnesia after saving the life of a pilot named Schultz. After...

It's a Wonderful Life

George Bailey is the son of the owner of a savings and loan association, which helps people in the small town...