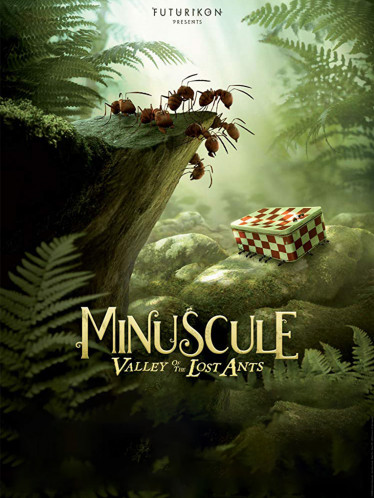 Review by Pauline Berra
Adventure all the way

After a skirmish with a gang of aggressive flies, a little ladybug gets lost and winds up on her own in the rain. She takes shelter in the leftovers of a picnic, finding a big tin of sugar that soon arouses the interest of a colony of black ants who become her pals. But it is not long before a group of ferocious red ants take an interest in their treasure. The little ladybug takes part in a ruthless fight between the two colonies.

Do not expect this film to be like A Bug's Life or Antz. This is very different to the productions by the big American studios, who like to offer very anthropomorphic versions of our insect friends, going so far as to have them behave like mirrors of our own societies. Minuscule is more like a documentary. The directors did their utmost to avoid anthropomorphism. Hence the insects do not speak, and that is where the film's originality becomes clear. The lack of dialogue leads to a more elementary mode of communication based on sounds and looks, meaning it is based more on feelings and emotions. For example, the friendship that gradually forms between the black ant and the lady bug is very touching thanks to its modesty and the finesse with the characters' feelings are conveyed. One lovely example is the ant's habit of patting the lady bug on the back with his antennae, either as a sign of recognition, a comforting gesture or simply a friendly touch. While charmingly distinctive, the film is also a nice tribute to the cinema, abounding with references and winks that film lovers will enjoy. For instance, the chases with the lady bug and the flies are reminiscent of Buster Keaton and Charlie Chaplin, the jumping spider's web is not unlike the famous home in Psycho and the battle sequence bring to mind the war scenes in Lord of the Rings. Minuscule is also a coming-of-age story, recounting the difficulties of growing up, confronting your fears and making decisions. Lastly, the story's extravagance raises a more grounded topic: issues relating to the pollution of nature. The film develops awareness of this theme in a particularly original way. By weaving waste into the plot, it deftly provokes thought on the issue while still being funny and moving as well as educational and exhilarating.

From age 4. One of the great benefits of this film is that it has no dialogue at all, which makes it easy for even the youngest children to understand. They can even put their own interpretations on the characters' modes of communication.