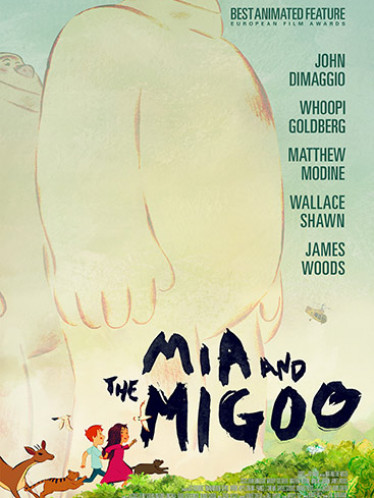 Review by Nadège Roulet
Friendship and romance Adventure all the way

Mia, a girl barely 10 years old, leaves the village of her birth somewhere in South America to go look for her father, who works on a building site where a wonderful tropical forest is supposed to be turned into a luxury hotel complex. To get there she has to cross a mountain surrounded by a huge forest populated by mysterious beings. On her way she encounters Aldrin, the son of the property developer, who is pained by a lack of paternal love. Together they are going to try to save the tree of life and the Migoos who protect it. An unforgettable experience and adventure from which they will emerge grown up…

After the flood ("Raining cats and frogs") comes deforestation. Faithful to the issues he holds dear, Jacques-Rémy Girerd whisks us off on another ecological fable, part awareness-raising exercise, part adventure film. Carefully presented through clever use of cross-cuts, the paths of Mia and Aldrin eventually converge in the middle of an immense forest that is threatened with destruction. They meet by a sacred tree which is the guarantor of life on earth and watched over by strange guardians, the Migoos. The film becomes funny when these quirky creatures get involved and it takes on a bit of a fantasy feel reminiscent of"My Neighbor Totoro". Along with the upside down tree – or the Tree of Life -, the Migoos are amongst the most beautiful discoveries and embody the rich poetic and symbolic qualities of this film. Jacques-Rémy Girerd's screenplay is a triumph thanks to the twists and suspense but also its tenderness and poetry. The film addresses global warming, melting ice caps, human greed and the destruction of nature but also simpler themes such as family, friendship and respect. All this is conveyed through the high-class graphic art of Benoît Chieux. The animation was done by hand – with pencil features inspired by the great impressionist painters – and special effects produced on computer, achieving an outstanding result. This lovely universal fable covers a subject rooted in modern concerns and chimes perfectly with our reality. It is sure to generate discussions and debates among the family.

The economic and “political” considerations around setting up a tourist centre in the middle of the Amazon forest may well go above the heads of very young viewers, who also risk being scared by some parts or shocked by the violent reactions of certain characters (father's anger, use of firearms). So Mia and the Migoo is not aimed at everyone. However, it will delight older children, aged 7 and above, and adults will recognise themes and issues with which they are very familiar (greed and deforestation for example).

Tatsuo Kusakabe moves into a house in the country to be closer to his wife Yasuko, who is hospitalised for a...