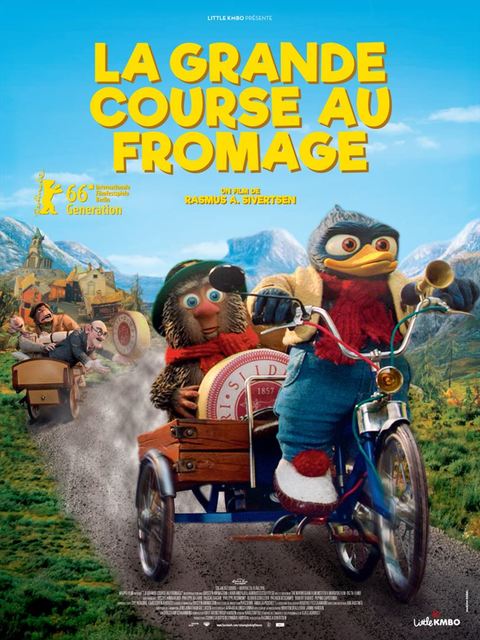 Review by Laetitia Scherier
The divine comedy Adventure all the way

The cities of Pinchcliffe and Pinchtown have competed against each other for as long as anyone can remember. So when Solan and Mr Grigoux hear about the ancient tradition of a cheese race between the two cities, they spot a chance to determine who is better once and for all! But, carried away by their enthusiasm and arrogance, they stake everything they own on the outcome of the race. With his friends Ludvig and Feodor in his team, Solan is certain he will win ... but that conviction soon turns to doubt when Mr Grigoux introduces his partners!

After the 2014 film Christmas in Pinchville, what a pleasure it is to hook up again with the spirited Norwegian heroes! For this second work, which was again inspired by the universe created by the famous Norwegian artist Kjell Aukrust, the director again chose to use stop-motion puppet animation. That was a daring decision because no stop-motion film had been made in Norway for 40 years! But the director was convinced that only this so-called artisanal technique - compared to computer generated graphics - could create the level of realism that he wanted to give viewers while giving full expression to the style of original characters. This joke-laden animated film is far more intelligent than initial glimpses and the title may suggest. It addresses big ideas and values that everyone should acquire as they grow up: competitiveness, solidarity, team spirit and how to manage rivalries. The Big Cheese Race also stimulates the imagination and creativity. It is a treat to watch Feodor, the father-like and responsible character, come up with new inventions all throughout the film. The portrayals of childhood and its contradictions, as personified by the very different Ludvig and Solan, is unerring and the choice of animal to represent them is perfectly judged. Ludvig, timid and fearful, is a hedgehog, while the impulsive and intrepid Solan is a garrulous magpie. To accompany these little figurines who are no more than 25 centimetres tall, the soundtrack, which was recorded by the Norwegian Radio Orchestra, mixes classical music and 1960s jazz numbers, perfectly alternating between the film's moments of high emotion and taut suspense. A treat for the whole family, and why not tuck into some cheese while watching it!

We recommend this film for ages 4-5 and over. The adorable and endearing characters will captivate the hearts of young children. What is more, the values they represent and uphold are especially important at that age.

After a skirmish with a gang of aggressive flies, a little ladybug gets lost and winds up on her own in the...