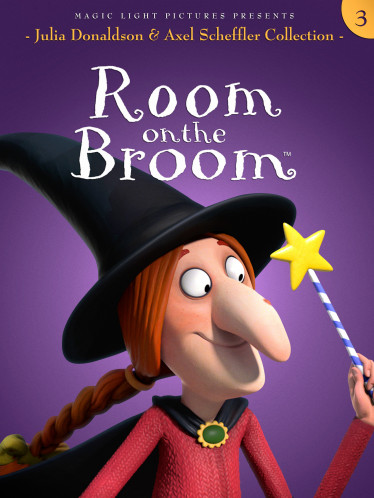 So what kind of adventures should we expect from a warm-hearted witch who has her head in the clouds and likes to go camping in the forest when she is not whistling along on her flying broom?

Iggety, ziggety, zaggety, ZOOM!! A generous measure of humour, a sprinkling of laugh-out-loud moments, the hairs and feathers of a few good friends and a dollop of tenderness: those are the ingredients that make this short film such a treat!

The first thing we notice about the witch is her hearty laugh. After sleeping in a tent with her faithful companion, a grumpy cat, the witch wakes up and immediately displays her main personality trait: carelessness! While clanking about with her cauldron she accidentally wakes a sleeping dragon ... whose favourite food happens to be witch and chips!  She flies off on her broom, leaving the hungry monster behind her - but he has already got her scent.

As in the The Gruffalo, the film adopts a pattern of repetition that harks back to the structure of "serial" tales. Items dropped by the witch are found, one at a time, by an animal who then becomes her friend. And each one then earns a ticket to travel on her broom. Each new friend represents a trait, or sometimes more than one: the cat is a jealous grouch but he is loyal; the dog is associated with enthusiasm; the bird with shyness and sadness; the precious and fastidious frog only agrees to fly after being convinced that the broom is clean. The combination of all the creatures' traits, added, of course, to the witch's friendliness, makes the adventure possible. Beyond the humour laced through the film, the tenderness and friendship are what enchant us.

Through the adventures of the kind and clumsy witch, young viewers will discover a film that carries nice values and, furthermore, will see more of the artwork and humour of the creators of the Gruffalo. The directors mixed computer animation and stop motion in an effort to stay true to the world of the writers of the book, Julian Donaldson and Axel Scheffler, while also creating an original animation.

Room on the Broom is a short film that will delight young viewers for the world depicted in the table - including the monster -, the fun spirit that runs through it and for the friendship that grows between the witch and the travellers she invites on to her broom. And since the witch is both amusing and endearing, this is a film for the whole family to enjoy!

Room on the Broom is an entertaining and touching story that will cast a spell on viewers from age 4 upwards.

Monsters and witches come from folk tales and have been staples of the cinema since its inception. While these creatures provoke fear and anxiety in the collective imagination, they often turn out to less terrible than thought. This course invites you to meet these strange characters and find out what lies behind their monstrous appearance...