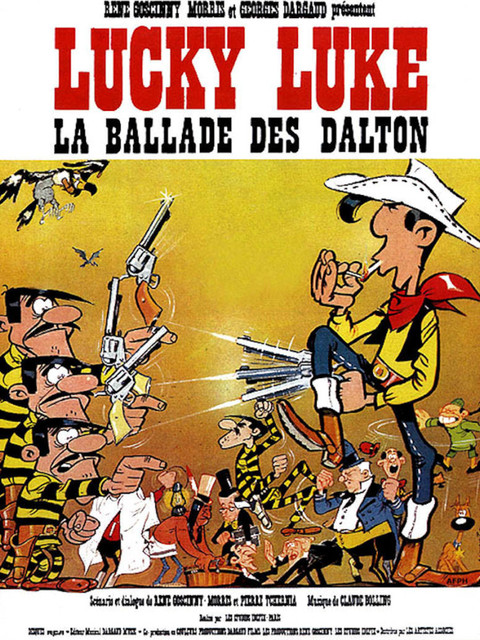 Review by Pauline Berra
The divine comedy Adventure all the way

The Daltons, the four most feared bandits in the West, have been locked up by the legendary Lucky Luke, a lone cowboy and law enforcer. One day a solicitor visits them in prison to read them the will of their uncle Henri Dalton, who tells them that if they want to get their hands on the fortune he left, then they must find and execute the members of the jury who found him guilty. There is also a reliable witness: Lucky Luke. The Daltons quickly strive to fulfil the wishes of their uncle and drag the lone cowboy into their macabre mission. But the cowboy has more than one trick up his sleeve.

Lucky Luke, the man who can shoot faster than his shadow, is not just a legend of the West, he is also a comic book legend. Created by the Belgian artist Morris, the character of Lucky Luke first appeared in magazines before his adventures started appearing in albums of his own. The Ballad of the Daltons is the second feature-length animated adaption from the universe of the famous cowboy. A parody of the Western genre, this universe is distinguished by its humorous tone. The film signals the tone right from the start: the doors open into a smoke-filled saloon where people are drinking whiskey while playing cards (and, where possible, cheating). The song performed by the man on stage, which sticks with us throughout the film, establishes the "legendary" status of character and his adventures. As the Daltons hunt down the jury members, the film more or less adopts the narrative structure of a series in which each episode revolves around a meeting with one of the eight members. This can be quite a repetitive format but here it varies in the way each jury member is approached by the Daltons before escaping death with the help of Lucky Luke. So there is a certain thrill with the repetitions, each of which carries its share of surprises, such as Dalton's priceless hallucinated scene in which music hall stars get together, and there are many nods to musical works such as Singin' in the Rain. This "ballad" also invites viewers to wander through the special universe of the Western, exploring the motifs that are caricatured here: the desert-dwelling Indian who makes rain fall, the undertaker who is always tracked by a vulture, and the rodeo tournament where cowboys become punching balls for their rides. Any viewers who are not familiar with usual Western motifs need not worry as the film's main aim is to make you laugh. Children will enjoy riding along on the adventures of a fearless and incorruptible pursuer of justice who only draws his weapon when necessary and who never flinches in the face of danger, nor loses his mischievous smile.

From age 6. The repeating structure makes the film relatively easy to follow. The humour will be enjoyed differently by viewers of different ages and references.

In Georgia, the American Civil War has just begun. Johnnie, a locomotive driver, wants to enlist in the army...