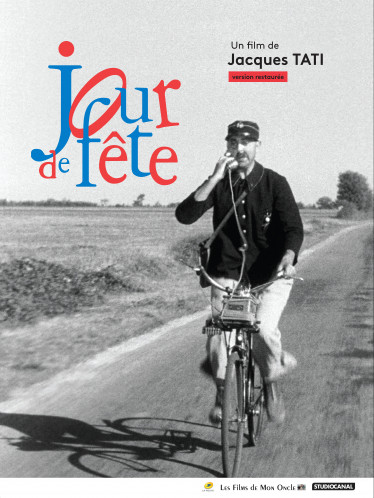 It is the 1940s. The sun rises above a French village. But today is not just another day: it is a public holiday. A fair sets up in the village square with a carousel, stands and even a travelling cinema. François, the bumbling but likable village postman, tries to do his usual round. But his enthusiasm crumbles when he sees a documentary about the revolutionary methods of American postmen. After being mocked and provoked by the villagers and the fair owners, François decides to show them what he can do…

Jour de Fête is Jacques Tati's first feature film, a slapstick comedy that transports viewers to a village in the south of France where time seems to have stood still. The fact that the film was made just after World War II makes its comic power and innocence all the more impressive. As in his other films, Jacques Tati plays the main character, a man whose mere presence leads to absurd and grotesque mishaps all around him. He is often the victim of these accidents but, since a good postman has to be a good communicator, he also delivers his cursed clumsiness to others. Gags run right through the film, whether subtle or obvious. We laugh at the way jokes are repeated and built up, and at how every last drop of comedy is squeezed from them. We chuckle at the way the character are like caricatures and at the words and sounds that get mixed up into a single language. Jacques Tati is at his most amusing when he makes masterful use of simplicity, like in the scene where François, who is on his bicycle in the distance, and a mower in the foreground are both distracted by the same bumblebee. Jour de Fête is one of those cinema classics that can be enjoyed by everyone who relishes a celebration of life tinged with nostalgia.

For age 6 and over: like many slapstick films, Jour de Fête is suitable even for very young children because the physical violence is totally defused and rendered ridiculous, like in a clown's routine.

The Triplets of Belleville

Madame Souza raises her grandson, Champion, alone and does everything she can to make him happy. She gives him...