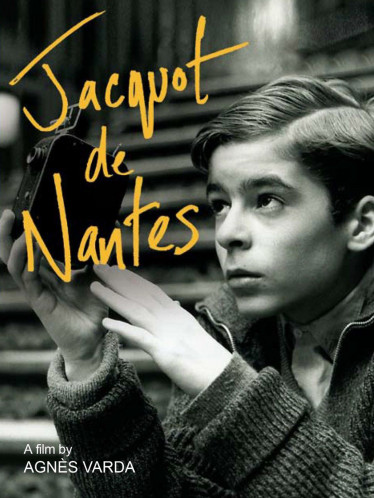 Review by Sarah Génot
The meaning of life

Jacquot is a nine-year-old boy. He lives in Nantes with his parents and little brother. The loving and united family lives in the family-run garage: Garage Demy. The story is set in the run-up to World War II and, with the carefree joy of youth, Jacques dreams of shows, the theatre and operettas. After devouring so many of them he starts to produce his own, making sets, creating puppet characters and inventing stories. The war turns the family's world upside down. The children have to go to live in the country, taking shelter with a clog maker who passes on to them his passion for craftsmanship. By his teens, Jacquot knows what type of craftsman he wants to be: a set designer and, ultimately, a film maker.

No one other than Agnès Varda herself can talk so powerfully about her film Jacquot de Nantes, which is a tribute the life of her husband, Jacques Demy, based on his childhood memories. "It all began because Jacques was sick. He had to stay at home a lot, in a workshop. He spent most of his time painting and he also wrote. He told me: "you know, that's what I want most to do, to tell the story of my childhood". He used to write down his memories. And then one day, I just said: "Your childhood is really interesting, it would make a lovely film." And he said: "Make it! "" And that's what Agnès Varda did. It is a poignant, funny and poetic film about the childhood of the man with whom she shared her life and who knew he was dying. There are several films within Jacquot de Nantes: a black and white film in homage to the films of the years 1939 to 40, when Jacques Demy discovered the cinema. It tells the story of Jacques from the ages 9 to 19 and is shot as simply as possible (with all the bits involving show business shot in colour). Then there are scenes (either in black and white or in colour) from Jacques Demy's films that were based directly on his childhood. And lastly, there is a 1990 film about Jacques Demy living the final few months of his life and finding it hard to undertake this last leg of his journey. "As a film maker, there was nothing I could do other than film very close up shots of his skin, his eye, his hair like a landscape, his hands, his blotches ..." And that is what is upsetting: "The film shows Jacques sick, Jacques dying. But the film is being made, it is a living organism." The film is ultimately a vibrant tribute to the city of Nantes and its landscapes by the Loire.

From age 8. Children will readily identity with the little boy with the precocious sense of what he wants to be. You will have to explain to them in advance that the film is structured as a patchwork of several narratives so that they can fully appreciate this magnificent love story about art and childhood.

The Young Girls of Rochefort

On a bright summer morning, a travelling fair crosses the transporter bridge leading to Rochefort. It sets up...

Once upon a time in a country far away, there was a king and queen who were wildly in love. But one day the...