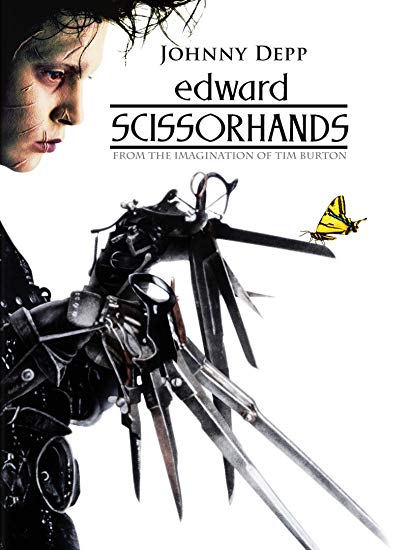 Review by Nadège Roulet
Fantasy The meaning of life

Peg, a charming door-to-door cosmetics saleswoman, discovers the isolated mansion of a tormented and frightened young man. But Edward is not like other guys: he has scissor blades for hands. He was given a heart so that he could love and a brain so he could think, but his eccentric inventor died before being able to give him real hands. Edward seems gentle and likeable so Peg decides to invite him to live with her family. His arrival in her quiet little community sparks curiosity and fascination that quickly turns to hostility…

"Once there was even a man who had scissors for hands." Tim Burton introduces his film as if it were a fairytale. But while its structure matches that of a fairytale, Edward Scissorhands is ultimately more a fantasy and satirical story with a Gothic feel. The film's creative universe, and that of Burton in general, is established right from the opening credits. These feature constant alternation between a watered-down set with pastel colours - a cute suburb drowning in exaggerated conformism - and a darker world represented by Edward's mansion and inspired by German expressionism and the Gothic romance of Frankenstein, on which the film is very loosely based. This juxtaposition of shade and light perfectly illustrates the thrust of the film, which is, above all, a dark critique of normality and the American way of life and a nice lesson in respecting difference. Burton uses the character of Edward to defend outsiders. The unhealthy curiosity and fascination that greet him on his arrival is swiftly replaced by the rejection of difference. The monstrous is never where we expect it to be The superb music of Danny Elfman, who is by Burton's side again for this film, plays a big role in creating this tale's ambient sensitivity and poetry. The way that the substance and impeccably rendered style go so well together help to make Edward Scissorhand a great film. It is an essential and unique work that still amazes and delights us. This is one of the great Tim Burton's earliest works but he is already at the peak of his artistic powers!

Some parts of the film may upset very sensitive viewers: for instance, the character of Edward, with his pale and scarred face, may seem frightening at first, but he is so friendly and shy that this impression does not last long. Some aspects of the final scene could also be considered to be a little violent. However, children from 7 upwards will be easily entertained by this magical, fantasy-laden tale. They will mainly be moved by Edward and the way difference is treated, and also rapt with wonder as well as a little weepy.

This story is set in an Eastern European village in the 19th century. Victor is a son of newly-rich...

Tell me if this bothers you

If I had green hair or scissors instead of hands, would you be bothered? If I were a girl who liked doing things that boys do, or if I were a boy who preferred dancing to boxing, would that also bother you? This course is designed to be an introduction to otherness, an invitation to think about the idea of difference.