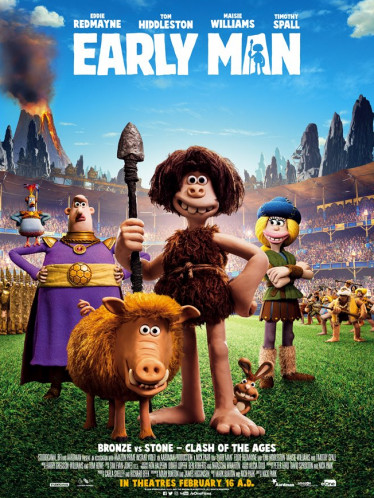 Review by Alice Rabourdin
The divine comedy Adventure all the way

4000 BC. Mammoths and dinosaurs live in perfect harmony with cavemen. The tribe of Dug and his best friend Hognob live in tune with nature. But then a threat far more formidable than the giant predators emerges: the Bronze Age. Our friends are ready to do whatever they can to avoid being crushed by modernity, even, maybe, if that means evolving themselves.

So what has the British studio Aardman Animations concocted for us here? Their latest feature film is another treat for us! Nick Park, the creator of Wallace and Gromit and Chicken Run, takes us back in time all the way to the Stone Age. There we meet Dug, who is the very epitome of Cro-magnon man until he is jolted out of his daily life: there he is happily hunting a rabbit with his tribe, when the Bronze Age and modernity suddenly arrive and threaten to expel them all. The film makes for a joyous ride into a prehistoric universe featuring cavemen and mammoths, where people wear nothing but animal hides and have boars for pets. Not only is this jaunt through space and time done with charming subtlety, but the masterful use of stop motion, for which the Aardman studio is renowned, never ceases to amaze us. Figurines made from modelling clay are animated image by image as viewers watch on with admiration and glee! Every shot astonishes with the precision of the characters' movements and expressions. The material comes to life before our very eyes. It is hard to believe while watching the film that (nearly) everything in it has been handmade. Not only is the animation artisanal, the figurines are also sculpted by hand. There are even moments when you can spot fingerprints on the characters. The aesthetic charm is undeniable, and the British wit completes the job of winning us over The starting point is already ripe for comedy: two prehistoric periods - the Stone Age and the Bronze Age - are going to meet and face off. But on this premise the film makers build a critique of society and ... the football world. With the off-beat humour that has become the hallmark of the Aardman studio, Nick Park presents a tender yet dark portrayal of the sport, which, in this telling, dates back to the Stone Age. Dug and his friends show through their (mis)adventures that football is not merely a contest but also - and above all else! - a question of teamwork, solidarity and mutual support! One thing is sure, football lovers will get a real kick from seeing their favourite sport transplanted into the era of mammoths! This family film's slapstick and anachronistic character will appeal to younger views, while the dialogue and various levels of understanding will ultimately win over older ones. The result will be pure fun!

From ages 5-6 to be sure that young viewers can appreciate some of the subtleties in the dialogue.

In 1870, Napoleon III orders Franklin, a renowned scientist, to make an invincibility serum so that he can win...

A 12-year-old Guinean boy, Bandian, leaves his rural village to follow his dream of becoming a top...