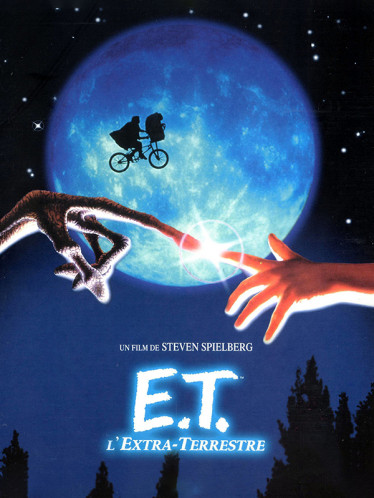 10-year-old Elliot lives with his mother, his big brother and his little sister in the suburbs of an American city. One night, he meets a space creature who got left behind on earth by his panicking companions when a group of men tried to capture them in the forest. Elliot decides to look after E.T. the extra-terrestrial, who is endowed not only with a higher intelligence but also supernatural powers. An extraordinary friendship blossoms between the pair - to the extent that Elliot and E.T. seem to become as one. Despite E.T.'s love for the child, he feels a deep yearning to go back home. The need to go back to where he came from is all the more pressing because the climate on earth does not really suit him and the American authorities are actively looking for him. Elliot does his utmost to help him return to where he belongs.

E.T. the Extra-Terrestrial is one of those films that left - and continues to leave - an indelible impression on the minds of children. Rarely in the history of cinema has a science fiction story been so wonderful.

Science fiction films generally portray extra-terrestrial creatures as predators or invaders whose intelligence is focused solely on wiping out humans. Spielberg - before he followed disappointingly in that vein by adapting H.G. Wells famous novel War of the Worlds in 2005 - initially overturned this tradition of depicting humanity as victims. He made the lovely Close Encounters of the Third Kind in 1977 before, in 1981, releasing E.T. the Extra-Terrestrial. Both films are powerful exponents of his pacifist ideal.

The director invites viewers to join Elliot and E.T. on an adventure beyond the realm of the real, to share their innocence and their friendship, which make the story all the more touching. E.T. is sensitive and very expressive (just like Elliot) and can transmit his emotions to the boy telepathically, an ability that gives the film some very amusing scenes. With humour and poetry, Spielberg gives young viewers a lesson in empathy. Using a theme that is as American, and also as universal, as can be - "E.T. phone home" - and a truly extraordinary story, the film maker guides us to an understanding that "the other" is not so different to us.

The magic of the cinema and an unconditional faith in the power of this art form flows through this film from start to finish. As a film buff himself, Spielberg enjoys slipping in an excerpt from John Ford's The Quiet Man and, for the duration of one scene, making Elliot a triumphant romantic hero based on John Wayne. Even though Spielberg knows all about genre cinema, E.T. is not a textbook science fiction film. Quite the contrary. Thus we only see space from afar, specifically from the forest or from Elliot's house, where most of the film's action takes place. Spielberg's ingenuity and subtlety lie in his ability to transport us to another place while staying an intimate and familiar setting into which E.T. blends marvellously, as exemplified by the shot in which he hides among cuddly toys. Hurtling along at a rattling speed, E.T. and Elliot have us laughing and crying along with them.

The perfectly judged orchestral music by John Williams (who scored most of the films of Steven Spielberg and George Lucas) contributes a lot to the film's singular atmosphere, which lilts between latent menace and wonderful miracle. The music still comes to mind years later whenever we gaze at a starry sky, making us nostalgic for our childhood. So yes, it is true, this film that became a cult classic for an entire generation bears deep traces of the 1970s and 80s, as can be seen from the sets and accessories and the characters' hairstyles and outfits. But that is part of its charm, and Spielberg, as an exceptional storyteller and master director, succeeded in making the film feel timeless, if not legendary.

We heartily recommend E.T. the Extra-Terrestrial to children aged 6 and over, as it deals with subjects that affect them in particular (childhood, family, friendship, difference and freedom) while also treating them to thrills and beautiful feelings. We suggest that younger and more sensitive children watch it with suitable accompaniment because it is an adventure and science fiction film in which strangeness and suspense are prominent. But it is well known that children like to give themselves a scare and E.T. the Extra-Terrestrial does that gently and with humour. It would be a pity to miss the opportunity to watch this as a family because everyone can enjoy it, and family is central to the story.