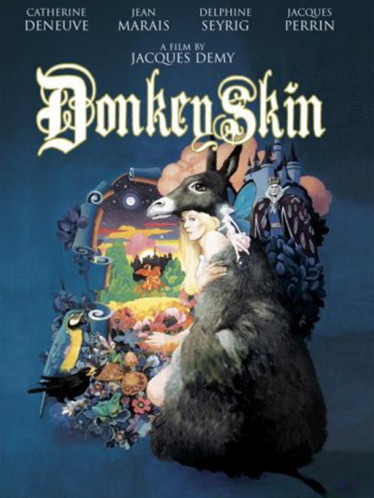 Once upon a time in a country far away, there was a king and queen who were wildly in love. But one day the queen died, and as she drew her last breath she made the king promise to marry a woman "more beautiful and better made" than her. After months of searching, the king sets his heart on his own daughter. To protect her from this forbidden and unreasonable love, the daughter's fairy godmother helps her flee and hide in a farm, where she works as a servant wearing the hide of a donkey.

Donkey Skin is a personal and timeless adaptation of the famous tale by Charles Perrault. It is personal because Jacques Demy draws on his own references and the world he has created. Since his earliest childhood he loved fairytales (he saw Donkey Skin as a puppet show). Jean Cocteau's film Beauty and the Beast (which he watched endlessly while preparing this film) was a particular inspiration to him and he pays tribut to the poet and director in this by quoting from one of his poems. He takes this tale and puts his own stamp on it while adding Michel Legrand's music in the style of a Disney animation, with our heroine singing of her love before eventually finding it (Demy saw Snow White and the Seven Dwarfs when it was first released). Michel Legrand, Jacques Demy's creative partner, wrote his sixth score for the director for this film. His gift is to be able to elevate the ordinary, as in the song Recette pour un Cake d'Amour, by brining out what is marvelous in the trivial. The psychedelic atmosphere of the film and poster shows the influence that travelling to the United States had on Demy. But what also makes the tale so timeless is Jacques Demy's refusal to embed it fully in its traditional Middle Ages setting. The film contains elements from another era - such as a telephone and a helicopter - and thus breaks away from the conventional view of fairytales to create a dreamlike and fantasy feel. The costumes enhance this feel with, for example, the decision to make one royal family blue and the other red, pushing the device to the extreme by making servants' faces and hair the corresponding colours. Another charming touch is the dress in the colour of time: Jacques Demy came up with the idea of designing a dress made from the same material as cinema screens, which would then be projected above the sky and clouds to give the dress and incredible appearance. The magic of the cinema and the magic of fairytales are mixed together for this film, which, essentially, celebrates the magic of illusion and marvels.

For age 5 and over. The film's timeless quality, its fabulous environment and the wonderful songs will carry young and older viewers into Jacques Demy's enchanted and magical world. Very young viewers will love the tale and the songs, while older viewers will enjoy the deeper references and the director's clever adaptations. A treat for the whole family.

Mona is a little princess who lives alone in a remote castle with her adoptive parents, a pair of sinister and...