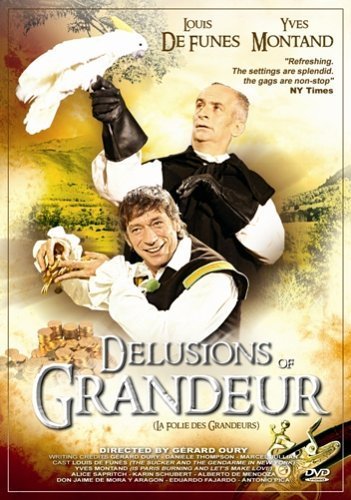 In 17th century Spain, the greedy and cruel minister of finance, Don Salluste, keeps raising taxes even though people are poor - and he makes sure to siphon some of the proceeds into his own pocket. One day, he is dismissed from his job and chased from the court by the queen, who despises him. Lusting for vengeance, he hatches a plot to compromise the queen. He uses his valet Blaze, who is deeply in love with the queen, and persuades him to try to pass himself off as nobleman named Don Cesar. That is the first thread in a web of misunderstandings that leads the characters into a series of improbable and preposterous situations.

The film's self-deprecating title masks its pedigree. It is actually based on Ruy Blas, a romantic play written by Victor Hugo. Led by Louis de Funès - the king of French comedy -, the film turns the play into a gloriously madcap and far-fetched romp. Ultimately, all that is retained from the play is a broad outline that provides a pretext for a string of sketches, mishaps and funny and astonishing situations, blunders of bluster and other crazy capers. The originality of the film - and the main source of its comedy value - is that it makes the baddie the hero of the story. We love to hate him. The role could have been custom made for De Funès, who, throughout his career, made a virtue of playing angry middle class men who are a little cowardly and very opportunistic, never slow to crush someone smaller than himself but happy to crawl in front of those more powerful. These characteristics are in evidence - and much more pronounced - in the treacherous Don Salluste, as if De Funès just had to exaggerate what he had done before. The film overflows with gags and highly comedic situations, but, make no mistake, De Funès is the chief conductor and manages to find himself in the most hilarious and grotesque scenes, helping to make the film a cult classic. That status was guaranteed by the scene where his character wakes up in a panic at the thought of a gold coin being lost, which remains a high point of comedy. De Funès was peerless in his time and, truth be told, has never been toppled. He remains exceptional thanks to the way he played with different types of comedy and the boundless energy that he brought to every role. The whole film is infused with the "madness" that he radiates, and it is even alluded to in the title. Every character wallows and gets lost in overly ambitious aspirations that lead them to commit ludicrous deeds and get themselves into absurd situations. Ultimately, the film emits a great sense of freedom, as if every character is enacting, in their own way, a kind of rebellion against the established order.

From age 8. The plot, with its conspiracies and misunderstandings, can sometimes be had to follow, but the gags and comedy stylings are sure to be grasped easily by everyone.

In the 19th century, the discovery of massive gold deposits in the Klondike provoked a huge influx of...

In 1918, a humble soldier from Tomainia suffers amnesia after saving the life of a pilot named Schultz. After...