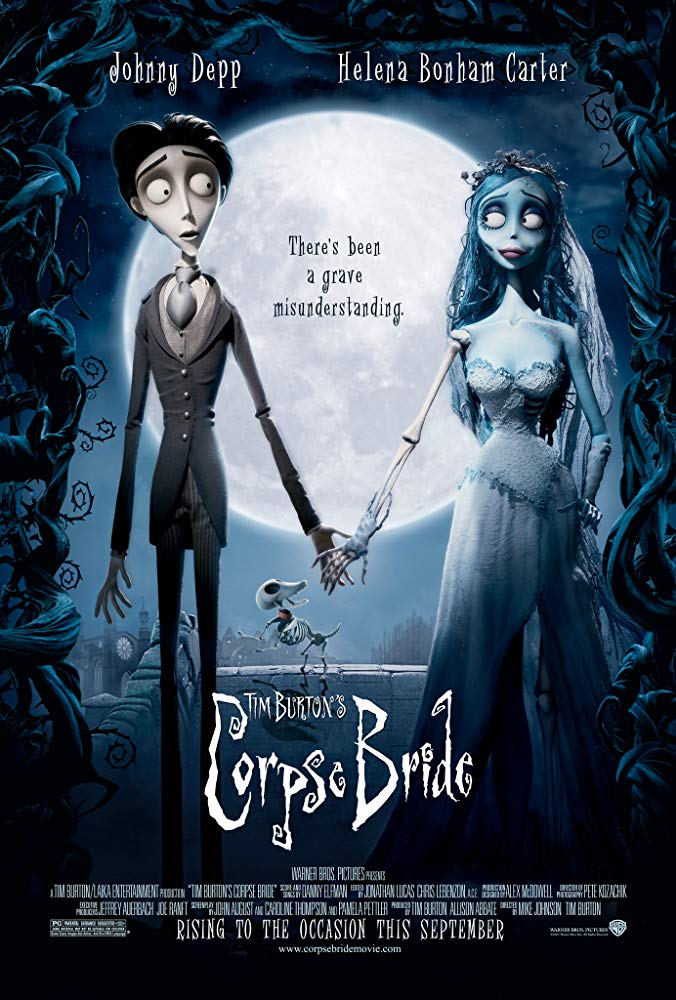 This story is set in an Eastern European village in the 19th century. Victor is a son of newly-rich fishmongers who want to adopt upper class stylings. He is to be married to Victoria, the daughter of snobbish aristocrats in need of money. But the young man arrives prematurely in the Land of the Dead after going to a nearby forest and unintentionally marrying the corpse of a bride. While he is away, his future wife Victoria waits for him desperately in the Land of the Living. Even though the kingdom of the dead turns out to be much more colourful and joyful than his real existence, Victor realises that nothing in the world, even death, can keep him from his true love.

"The project was in the pipeline for 10 years, we just had to get the right team together," said Tim Burton; it then took him a year to prepare the film. The fruit of that labour is clear to see from the richness and detail of the finished work, which is a feature film of great quality. The film deservedly scooped several awards and received an Oscar nomination for best animated film in 2006. The stop-motion animation technique used for the puppets in sumptuous sets, which were previously in evidence in The Nightmare Before Christmas, gives the film soul and real charm. On top of these technical feats, the film is distinguished by typical Burtonian qualities: dark romanticism, dreaminess and funereal Gothicism, all tinged with side-splitting black humour. In this story, the Land of the Living is dull, grey and cold, much deader than the Land of the Dead. The film portrays and condemns a repressed and rigid Victorian society. With the exception of the engaged couple and the old governess Hildegarde, the characters practically compete to see who can be the grimmest and least likable. The Land of the Dead seems much more pleasant, full of vibrancy and fantasy. The dead characters are unusual, stylish and funny. There are skeletons of all shapes and ages, a man who can split in two, a head that moves around on insects, and so on. Free from any restrictions, these cadavers party with good music and are wilder and more lively than ever before. The problem for Victor is that he is well and truly caught between two worlds! Since he was making a musical comedy, Tim Burton paid particular attention to the music. He worked closely with the composer Danny Elfman, making this the twelfth project on which they collaborated. The result is melodies that are at times funny and at other times jazzy, orchestral or stirring. There is also a recurring piano theme that underpins the story and lends it even more sparkle. Corpse Bride is a creative oeuvre that fits perfectly into its director's body of work. It is full of fantasy and beauty and approaches death with humour and poetry.

This film will entertain the whole family but could frighten very young children. That is why we recommend it for viewers aged over 6 or even 7.

Travel through cinematic genres that have marked the history of cinema from its beginning to the present. Pirates films, slapstick, fantasy, science fiction, westerns, thrillers or parody, will you be able to identify the motifs that define each of these genres? These seven totemic films will transport you into different universes and eras. Meet pirates, cowboys or detectives and discover the "genre theory" step by step. A first step towards developing your love of cinema...

Shivers down the spine

A jaunt into the world of the dead, a disturbing encounter with a poltergeist, a mysterious disappearance ... Benshi invites you on a worrying, scary and terrifying course! Films that will give you the chills from age 8 upwards.

I live in the world. But the world is, first and foremost, what happens in my backyard. I would like to invite you here. Whether I live in a city or the countryside, in a rich neighbourhood or a poor one, or in a peaceful country or a country at war, I did not choose to be born here but this is my world. It shapes me and defines me in ways I cannot know, so will I be able to get away from it to free myself? Will I want and need to? There are visible borders (such as a wall, an edge or an enclosure) and invisible ones (beliefs, culture, a real or imagined danger, what my parents think and the ideas they pass on to me, the way people look at me because I live here) between me and the world. This film course invites viewers to discover how cinema addresses the issue of where we live. Each film has its own way of living in the world.