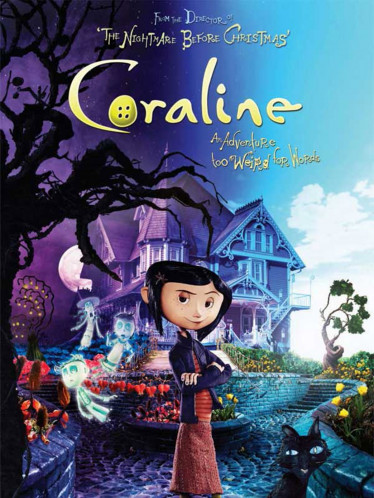 Review by Laetitia Scherier
Fantasy Adventure all the way

Royally ignored by parents too preoccupied with their work, Coraline Jones is given no choice but to move with them far away from her friends and into an isolated old house ironically named "Pink Palace". Like all 11-year-old girls, she is intrepid and curious. To overcome boredom she goes exploring this new house and finds a small door hidden in the lounge wall. When she goes through it, she finds herself in another world. It is a lot like her one, except that everything seems more joyful and colourful. But she quickly learns that there are some doors you should not open ...

After enchanting us with The Nightmare Before Christmas, Henry Selick repeats the feat and gifts us a wonderful, mind-blowing gem of animation. His work on Coraline, which he describes as "a Gothic Alice in Wonderland", proves yet again that he perfectly masters the art of stop motion animation, with each puppet image individually animated. Here, instead of a charming white rabbit there is a disturbed and mischievous black cat, who plays the role of guide with great reluctance! Coraline is cleverly plotted and can be understood on various levels. Above all it questions the link between dreams and reality, and the relations between generations. The young heroine, who is searching for her identity and struggles to communicate with her parents, sees her childhood fantasies made real in this other decidedly dreamlike other world. As she is convinced that nothing could be worse that her terribly boring new life, Coraline goes through the door that separates her from the other world and serves as a poetic symbol of her passage to adolescence. Each of the worlds is inhabited by a gallery of colourful and highly unconventional characters, whose appearances are lifted from the collective imagination of children's nightmares. Coraline quickly learns that it is worth thinking twice before seeking to change your life, and the grass is not always greener on the other side! The soundtrack by the talented Bruno Coulais plays a big role in immersing us in the spine-tingling atmosphere of this crazy fairytale. Ideal for starting a family discussions and exploring your first fears so as to take the sting out of them.

We suggest waiting until children are 8 or 9 before showing them this slightly scary fantasy tale, as the creative universe is a bit dark and the film could unsettle very young viewers.

Nathaniel is nearly seven years old but still can't read. But when his Aunt Eleanor dies, she leaves him the...

This story is set in an Eastern European village in the 19th century. Victor is a son of newly-rich...