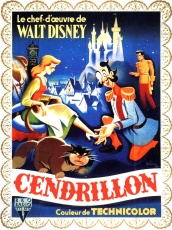 Following her father's death, Cinderella is forced to live under the rule of her wicked stepmother and her two horrible stepsisters. She becomes a servant in her own home. In spite of her tough day-to-day existence, the young woman continues to hope that her dreams of happiness will come true. Then one day the king holds a ball to which all the young ladies of the kingdom are invited. Thanks to the magic of her fairy godmother, Cinderella is able to go to the ball, but the spell will wear off at midnight. Will she have enough time to meet the prince?

Not only is Cinderella a Disney classic, it is also one of the most popular fairytales. Many versions of it have existed throughout the ages and around the world. The best known, and the one which serves as a reference for others, was written by Charles Perrault (and published in 1697). That is also the version on which Disney based their adaptation, which became, in its own right, a reference point in the collective imagination (as has been the case with many other tales adapted by the famous studio). Cinderella is - with Snow White - among the first in a long line of feature films with princesses that practically became the Disney trademark. In adapting this famous tale, Disney injected the skill and touch that has made it so successful. The film stays faithful to the story while adding some original parts and scenes. For instance, the mice are given a much bigger role and accompany Cinderella in her daily tasks, leading to unforgettable scenes such as when the ball gown is being made. There are also some fabulous cartoonish moments between Gus and Jack and the cat Lucifer. Humour runs throughout the film, mainly through supporting characters that often operate as a duo, such as the stepsisters and the King and the Duke. This comedic aspect is enhanced by the way the characters are drawn rather like caricatures. Poetry also permeates the film, like in the scene in which Cinderella sings while surrounded by soap bubbles that hold her reflection, or the dance scene with the prince. The music also contributes significantly to the atmosphere and, what is more, is often used as a form of escapism for Cinderella. And lastly, what would Cinderella be without the fairy godmother? She is a central and crucial presence in the film, bringing the only element of fantasy to the plot, plus a scene that has become immortal. A dazzling flourish of a magic wand that transported Disney studios into a new golden age!

From age 5. A blend of humour and poetry that has something to please viewers of all ages.

Once upon a time in a country far away, there was a king and queen who were wildly in love. But one day the...