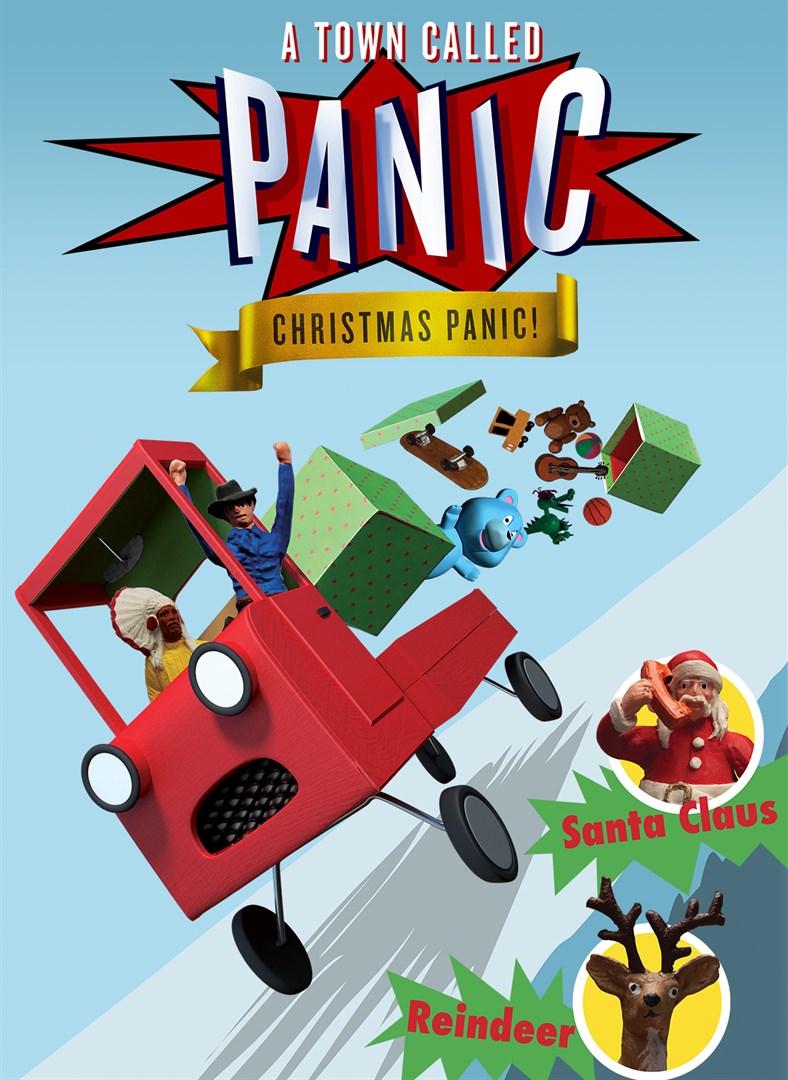 The festive season is drawing near. Christmas, goodwill, New Year's Eve. Cowboy and Indian are looking forward to getting their presents. As they struggle to contain their excitement, they start squabbling and end up destroying the Yule log that Horse was making. The furious Horse asks Santa Claus to cancel the pair's gifts. How can the duo get back in the good books of Horse and Father Christmas? How can they get their hands on their presents? Cowboy and Indian face a very long Christmas Eve.

What could be more nutty and amazing than the incredible adventures of Cowboy and Indian, two scamps raised as brothers by the very well educated Mr Horse? Their gentle and cheerful madness is what this film is all about. This short was made ten years after the first series of A Town Called Panic, which consisted of twenty episodes (2003). The two film-makers also voice their characters, which are inspired directly by childhood toys, as the cast is made up of plastic figurines of farm animals, law enforcement officers and, of course, our two heroes from the Wild West, Indian and Cowboy. Amid brightly coloured plasterboard sets, the characters are filmed on their green bases using the stop-motion technique, creating an amusingly jerky choreography as if they were being moved by invisible strings. Time is of the essence: Christmas is coming but not fast enough for our two friends. The month seems to crawl by! The days pass so slowly that the pair nearly go around the bend in their pretty house perched on a hilltop. The film delights us with its use of slapstick, with perfectly judged comic timing that ensures jokes keep coming at a rattling pace and wrapped up in everyday actions and habits. In fact, "go around the bend" is not exactly the right expression. It would be truer to say that as our heroes wait for the special day, they go around and around in circles, quite literally. So much so that they end up drilling a big hole in the middle of their living room! And then, at last, the longed-for day arrives. Horse needs help: the house must be cleaned. That is the cue to a remarkable scene featuring a big tidy-up. But in the middle of this whirl of activity, something awful happens! The fatal accident occurs. And, alas, the Yule Log is ruined. Cowboy and Indian must be punished. Horse is harsh but fair, and he rules that there will be no presents this year for the ill-disciplined children. That is when our two friends unleash all their energy and plenty of cunning and imagination to save Christmas. They must make amends by any means necessary. They must have their presents! Viewers follow them on a frantic race in which Cowboy and Indian use all kinds of wiles to achieve their goal. We are gobsmacked by their inventiveness, which causes lots of trouble for their neighbours and animals! They let nothing stand in their way, and even trespass into Santa Claus's den... An avalanche of jokes to be savoured without moderation!

The film is aimed at everyone above the age of 5 or 6 and there are numerous amusing references that will tickle older viewers.

Cowboy and Indian are clumsy. To celebrate the birthday of their friend Horse, they decide to get a kit for...