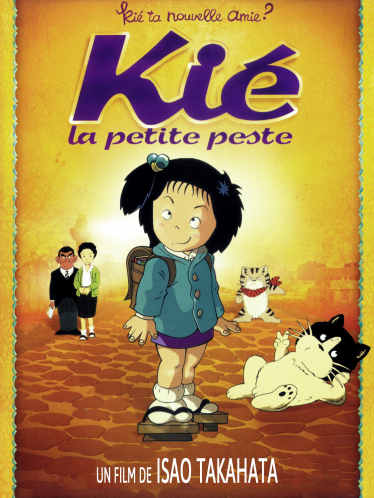 Review by Pauline Berra
The divine comedy The meaning of life

Chie is an 8-year-old girl who lives in a working class neighbourhood in Osaka, Japan. Her mother has left home, leaving her alone with her father, Tetsu. He is an irresponsible, work shy man who spends his time getting into fights and gambling, sometimes with money he does not have. So Chie takes charge of things and keeps the household going by running the family restaurant when she is not at school. While she craves independence, she also worries for her father and secretly hopes that her mother will come back so they can be a family again. The film uses the daily life of this "brat" to tell a family story, showing the difficulties she endures as well as the joys.

Rather than a brat, Chie is in fact a resourceful little girl with a strong character. Above all, she is a child who has to shoulder responsibilities too heavy for her young age. Starting from this character's viewpoint, the film takes us into the day-to-day existence of a Japanese family and their setbacks - and it does this while using a slapstick and totally nutty humour. Even though the film adopts a tone of farce, that does not mean neglecting the psychological aspect, and the gags are served up with an underpinning of seriousness. The story is built around a series of sketches linked by a main theme (the possible return of the mother), thus leaving the dramatic stakes in the background so as to bring them to the fore in only a few emotion-filled moments. It is also worth noting the finesse with which the characters' psychology is handled: here there are no good guys and bad guys, as everyone evolves and changes all throughout the film. Chie the Brat is the third feature film by director Isao Takahata, a celebrated film maker who came to prominence in France thanks to the success of his film Grave of the Fireflies. It is one of the founding stones of his filmography, laying the basis for his favourite themes. These include: family and community life (to which he returns with particular merit in My Neighbours the Yamadas), and the importance of human feelings and small things in daily life. Takahata also exhibits a lot of love for his characters, whom he nurtures with particular care. Another significant fact about this film is that it stands apart from the productions that were trendy at the time it was made (it was released in Japan in 1981), when most films dealt with sport and space ships. White Chie, Takahata puts his faith in a people-focused animated film, taking great care to achieve authenticity and realism in the feelings.

Children under 7 may miss the subtleties in the film (though some gags will still be understood and enjoyed). Children older than that will have no trouble understanding and we heartily recommend watching the film in its original version. This is because Isao Takahata made a point of using voice actors from Osaka, where the story is set. This city is known in Japan for its distinctive accent, which is often looked down upon by residents of the capital. By hiring actors from this region, Takahata sought to promote it and pay tribute to what makes it unique.

Whether they are adventure heroes, spies, companions or simply everyday characters, cats have played a prominent role in cinema. Leap into their universe, see the world as they see it and wander around with them by taking part in this miaow-some course!

The time to go back to school is not far away so Benshi decided to focus on children ... but not just any kids: these are scamps, tear-aways, pests and incorrigible rascals - in other words, brats! These films put the spotlight on naughty children who wreak havoc wherever they go, brazen as you like and sometimes full of quirky humour. But since cinema knows how to handle things, the portraits of these short-trousered terrors are also opportunities to investigate what lies behind their explosive and fragile emotions. School's back, long live break time!