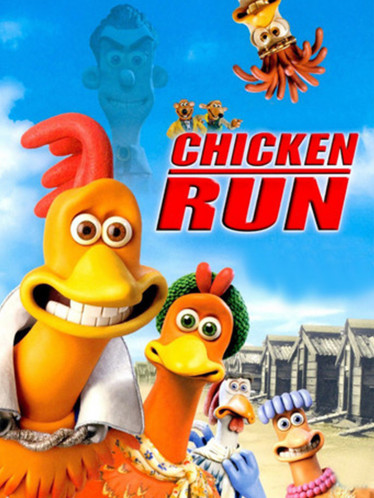 Held captive in a chicken coop that resembles a prisoner-of-war camp, a troupe of chickens search desperately for a way to escape their grim fate: Mrs Tweedy, the farmer, wants to turn them into pies! Fortunately, a rooster named Rocky crash-lands into the farm to help them ... But it turns out he is not quite as reliable as hoped. Meanwhile, the Tweedys' fiendish plan gathers pace ...

Chicken Run was the first "super production" by the Aardman Studio and stands out because of the various levels of meaning it carries. First off, it is an action film. Although the film takes place entirely in a chicken coop and its surrounding area, it deploys a whole arsenal of visual inventions, has particularly nerve-shredding sequences and confirms Nick Park's fondness for dastardly contraptions. The action is served up with a big dollop of humour: the animation of the chickens is irresistible, as are the characters. This is a thinly disguised remake of a classic escape film, namely The Great Escape. The tribute is simultaneously blatant and refreshing, as the disconnect between the original and its application to a chicken coop is so bracing. From the music to the reprising of certain famous scenes, Chicken Run does more than emulate the original, it explodes it. But it is in the third level of interpretation that Chicken Run really gets wings, as it inspires a dizzying reflection on the boundary between reality and fiction, real and fake chicken, cinema and modelling clay. Chicken Run is, in a sense, three films in one, a real Rubik's cube that will delight viewers of all ages thanks to its expansive freedom. Escape to victory!

The film ingeniously caters to viewers of all ages thanks to characters, situations and references that can be understood on several levels. From age 6.

At Manor Farm, the animals work without rest from morning till evening under the orders of Mr. Jones, a...

Sometimes cinema makes fun of itself by subverting a genre's motifs with humour and tenderness. This can mean alluding to characters or themes and exaggerating them or turning their characteristics upside down. These parodies are often very funny and, above all, are vibrant tributes to a genre or film that has made an impact on the history of cinema. Frankenstein, for example, has been regularly parodied (e.g. Frankenweenie, Frankenstein Junior) Will you be able to recognise the genres or works being spoofed in the films on this course? A good, alternative way of discovering the cinema while laughing...